High inflation and near-full employment will push the Fed to raise rates more quickly than expected, according to Goldman Sachs.

Persistently high inflation combined with a labor market near full employment will push the Federal Reserve to raise interest rates more than expected this year, according to the latest forecast from Goldman Sachs.
The Wall Street firm’s chief economist, Jan Hatzius, said in a note Sunday that he now figures the Fed to enact four quarter-percentage point rate hikes in 2022, representing an even more aggressive path than the central bank’s indications of just a month ago. The Fed’s benchmark overnight borrowing rate is currently anchored in a range between 0%-0.25%, most recently around 0.08%.

“Declining labor market slack has made Fed officials more sensitive to upside inflation risks and less sensitive to downside growth risks,” Hatzius wrote. “We continue to see hikes in March, June, and September, and have now added a hike in December for a total of four in 2022.”
Goldman had previously forecast three hikes, in line with the level Fed officials had penciled in following their December meeting.
The firm’s outlook for a more hawkish Fed comes just a few days ahead of key inflation readings this week that are expected to show prices rising at their fastest pace in nearly 40 years. If the Dow Jones estimate of 7.1% year-over-year consumer price index growth in December is correct, that would be the sharpest gain since June 1982. That figure is due out Wednesday.
At the same time, Hatzius and other economists do not expect the Fed to be deterred by declining job growth.

Hatzius thinks those converging factors will cause the Fed not only to raise rates a full percentage point, or 100 basis points, this year but also to start shrinking the size of its $8.8 trillion balance sheet. He pointed specifically to a statement last week from San Francisco Fed President Mary Daly, who said she could see the Fed starting to shed some assets after the first or second hike.
“We are therefore pulling forward our runoff forecast from December to July, with risks tilted to the even earlier side,” Hatzius wrote. “With inflation probably still far above target at that point, we no longer think that the start to runoff will substitute for a quarterly rate hike.”
Up until a few months ago, the Fed had been buying $120 billion a month in Treasurys and mortgage-backed securities. As of January, those purchases are being sliced in half and are likely to be phased out completely in March.
The asset purchases helped hold interest rates low and kept financial markets running smoothly, underpinning a nearly 27% gain in the S&P 500 for 2021.
The Fed most likely will allow a passive runoff of the balance sheet, by allowing some of the proceeds from its maturing bonds to roll off each month while reinvesting the rest. The process has been nicknamed “quantitative tightening,” or the opposite of the quantitative easing used to describe the massive balance sheet expansion of the past two years.
Goldman’s forecast is in line with market pricing, which sees a nearly 80% chance of the first pandemic-era rate hike coming in March and close to a 50-50 probability of a fourth increase by December, according to the CME’s FedWatch Tool. Traders in the fed funds futures market even see a nonnegligible 22.7% probability of a fifth rise this year.
Still, markets only see the funds rate increasing to 2.04% by the end of 2026, below the 2.5% top reached in the last tightening cycle that ended in 2018.
Markets have reacted to the prospects of a tighter Fed, with government bond yields surging higher. The benchmark 10-year Treasury note most recently yielded around 1.77%, nearly 30 basis points higher than a month ago.
David Goldsmith
Associate Broker
Bank Neary Realty
David@BankNeary.com
212-633-2727 x213
@nyc_real_estate_guy Instagram 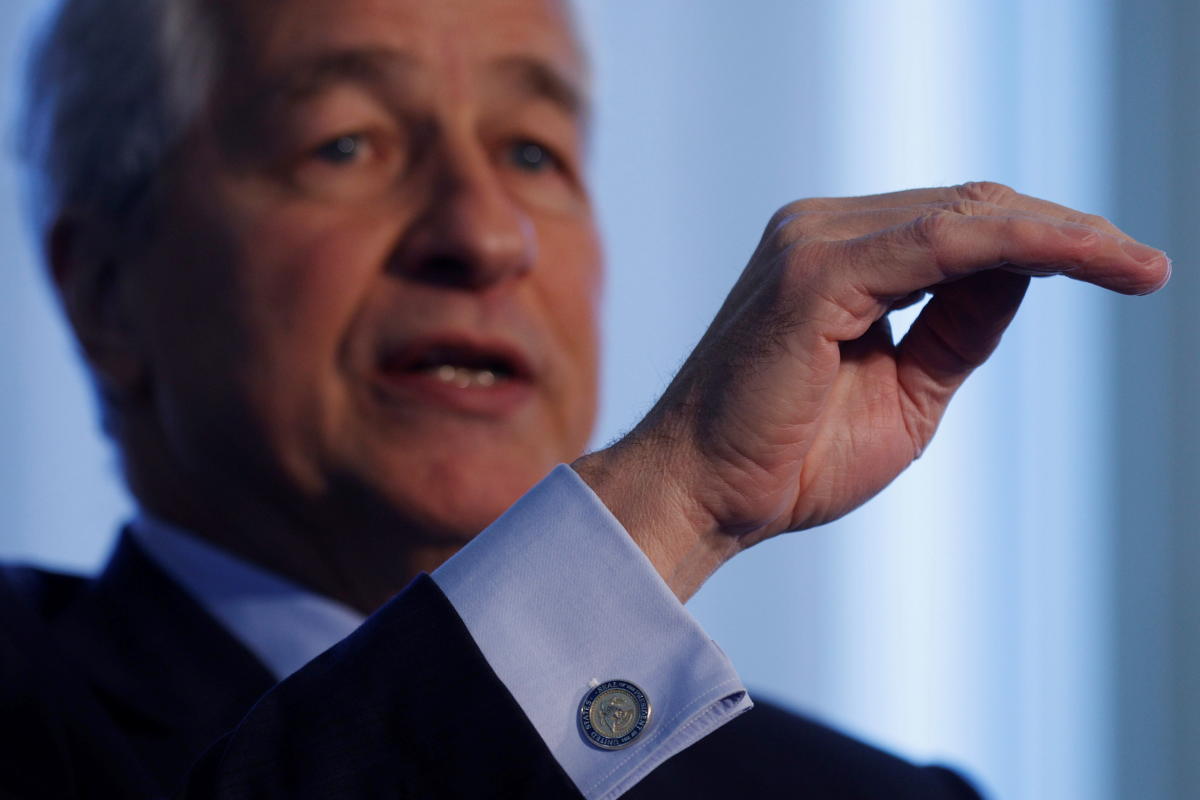 JPMorgan chief executive officer Jamie Dimon predicted on Friday that rising inflation could prompt the Federal Reserve to raise short-term borrowing costs as many as six or seven times, doubling down on his earlier bet that the currently-anticipated three to four increases are likely a low...

Jamie Dimon sees more rate hikes than we think for the U.S. economy this year.
The JPMorgan (JPM) chief executive officer predicted on Friday that rising inflation could prompt the Federal Reserve to raise short-term borrowing costs as many as six or seven times, doubling down on his earlier bet that the currently-anticipated three to four increases are likely a low estimate of what investors can expect.
“My view is, there’s a pretty good chance there will be more than four — there could be six or seven,” Dimon said during a post-earnings conference call Friday morning. “I grew up in a world where Paul Volcker raised his rates 200 basis points on a Saturday night.”

A JPMorgan spokesperson said Dimon was discussing the "possibilities over time, not probabilities," in his remarks and it really depends on the value of such hikes.​

The Fed has made a sharp, hawkish turn on monetary policy in recent months amid a backdrop of surging inflation and a faster-than-expected labor market recovery to tilt towards a quicker pullback of pandemic-era stimulus. The pivot has prompted big Fed watchers — the likes of Goldman Sachs and Deutsche Bank among them — to revise their outlooks in anticipation that short-term interest rates will be higher by the end of 2022 than where they are now.

Dimon has been among that cohort, previously expressing his view that the U.S. economy could absorb more than four rate hikes this year.
“This whole notion that it’s somehow going to be sweet and gentle and no one is ever going to be surprised I think is a mistake, but that does not mean we won’t have growth,” the nation’s top banker said during the call after JPMorgan’s fourth quarter earnings release. 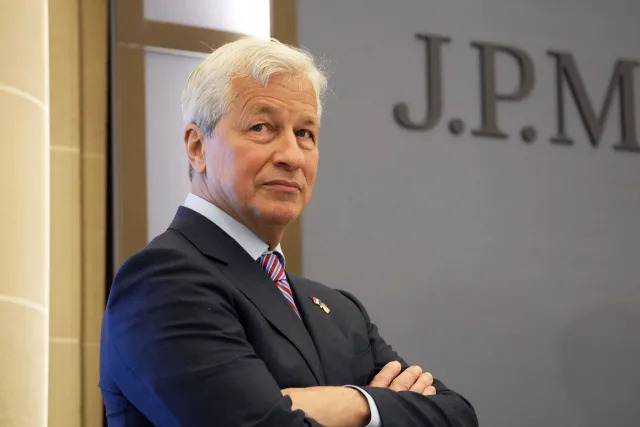 JP Morgan CEO Jamie Dimon looks on during the inauguration of the new French headquarters of US' JP Morgan bank on June 29, 2021 in Paris. - American bank JP Morgan's new trading floor is the latest example of how Brexit is changing Europe's financial landscape since January.
“At this point, it’s up to the Fed to thread the needle: slow down the growth in inflation without stopping the growth,” he said, adding that he has "a lot of faith in Jerome Powell.”

Hennessy Large Cap Financial Fund Portfolio Manager David Ellison told Yahoo Finance Live that if Dimon’s estimate is correct, assuming increases of 25 basis points each, that would mean short-term rates could be up 2% by the end of the year.
“If it’s that much, the market is going to have a lot of trouble across the board, just because the last time we did this, it got beat up,” said Ellison, who criticized Dimon's remarks on rate hikes calling it "an irresponsible comment" because of the impact the JPMorgan CEO's comments can have on markets.

Shares of JPMorgan Chase & Co fell as much as 5% in early trading Friday after the company reported fourth quarter earnings that reflected a 14% drop in profits during the period due to a slowdown in trading activity, narrowly beating analyst estimates thanks to strong performance in its investment banking unit. Specifically, the bank saw trading revenue fall 13%, while investment banking revenue jumped 28%, boosted by a blockbuster year for deals. In all, JPMorgan turned a profit of $10.4 billion, or $3.33 per share, in the period ending December 31.
“We broke open the piñata today on earnings and the operative word is in line,” Ellison told Yahoo Finance Live. “I think that’s why the stocks are trading down."