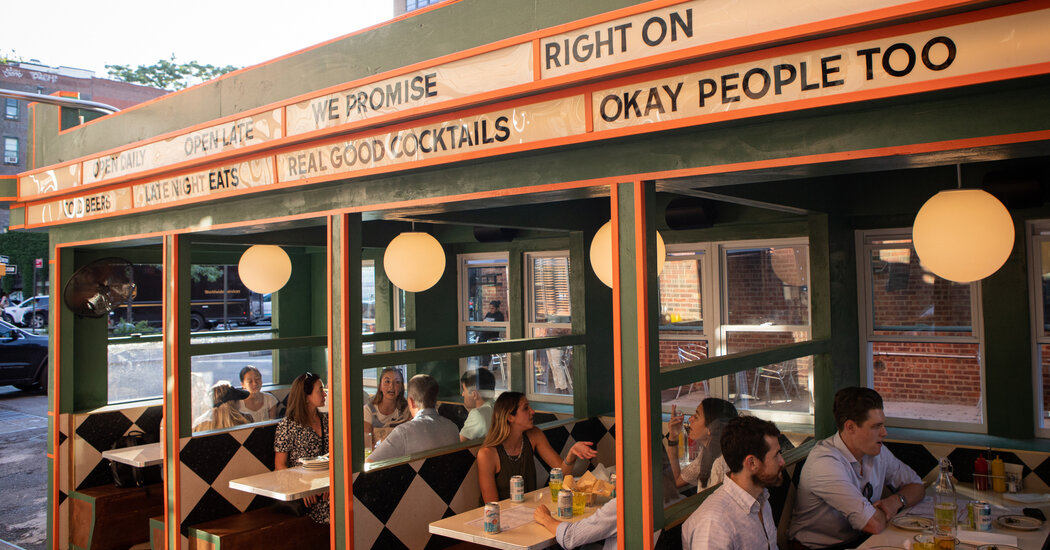 New York is moving to make outdoor restaurant sheds permanent, but some activists are fiercely opposed.

The coronavirus pandemic moved New York City’s restaurants onto the sidewalks and into the streets. Now the city is moving to make a variation of its Open Restaurants program permanent. In July, the city proposed a change to zoning rules that would permit restaurant structures at the curb to stay up indefinitely. Officially, they are only temporary now. The city expects to begin taking applications for the permanent structures late next year.​

The restaurant industry, one of the city’s economic tentpoles, is doing better now than it was at the beginning of the year, when the New York City Hospitality Alliance said that 92 percent of restaurants could not pay the rent. Still, Andrew Rigie, the executive director of the alliance, said that only about two-thirds of restaurant employees have returned to work since pandemic restrictions on dining were eased. Restaurants added only 3,000 restaurant jobs in August, the fewest in any month this year, he said.
Complicating the picture for restaurants were two incidents last week. One involved an Upper East Side restaurant that has a shedlike structure at the curb. A 28-year-old man was shot while having dinner outside. The police said he got into a struggle with one of two men wearing masks who jumped out of a sport-utility vehicle and approached customers in an attempted robbery.
The other incident underscored the continuing tensions over vaccinations, as well as restaurant workers’ new frontline roles in dealing with regulations. The police arrested three women from Texas who they said had punched a hostess at Carmine’s, an Italian restaurant on the Upper West Side. The police said last week that the women had been vaccinated.

The lawyers said the brawl began after two men who joined their party could not provide similar proof.
Justin Moore, a lawyer for one of the women, described the altercation as “mutual combat” and said that the hostess had used a racial slur. But Carolyn Moore, a lawyer for the restaurant, said by email that “nothing about this incident suggests race was an issue.”

From an urban planning perspective, Open Restaurants was not about keeping customers plied with entrees, desserts and drinks — and thus keeping restaurants in
business. It was, and is, about how public spaces in the city can be used.
Daniel L. Doctoroff — a former deputy mayor who is now the chief executive of the urban-innovation company Sidewalk Labs — argued in an Op-Ed in The Times in July that planners “need to think bigger than dining sheds,” noting that he was “not anti-shed” but “pro-public space.”
Opponents say that making outdoor dining permanent would compound neighborhood headaches.
One neighborhood where opponents have been particularly vocal is the Lower East Side — “an incubator of what not to do,” said Diem Boyd, the founder of the community group. She complained that outdoor restaurants have contributed to an “open-air nightclub, wild, wild West atmosphere.”
Opponents like Ms. Boyd and Cue-Up, an alliance of community groups whose full name is the Coalition United for Equitable Urban Policy, maintain that the Open Restaurants plan would amount to a “land grab” for restaurants. Micki McGee, a member of Cue-Up, said that permanent outdoor restaurant facilities would also create “a streetscape populated by restaurants that are no longer serving the neighborhoods but are serving as tourist attractions.”

Worse, Ms. Boyd said she was concerned that the city’s plan would drive out retailers. “The mom-and-pops that you love, the tailor shop or the vintage shop, they’re going to go, because the landlord is going to say ‘I can put a cafe in there, I can have the roadbed, increase the rent,’” Ms. Boyd said. “It’s going to kill small businesses.”
David Goldsmith
Associate Broker
Bank Neary Realty
David@BankNeary.com
212-633-2727 x213
@nyc_real_estate_guy Instagram 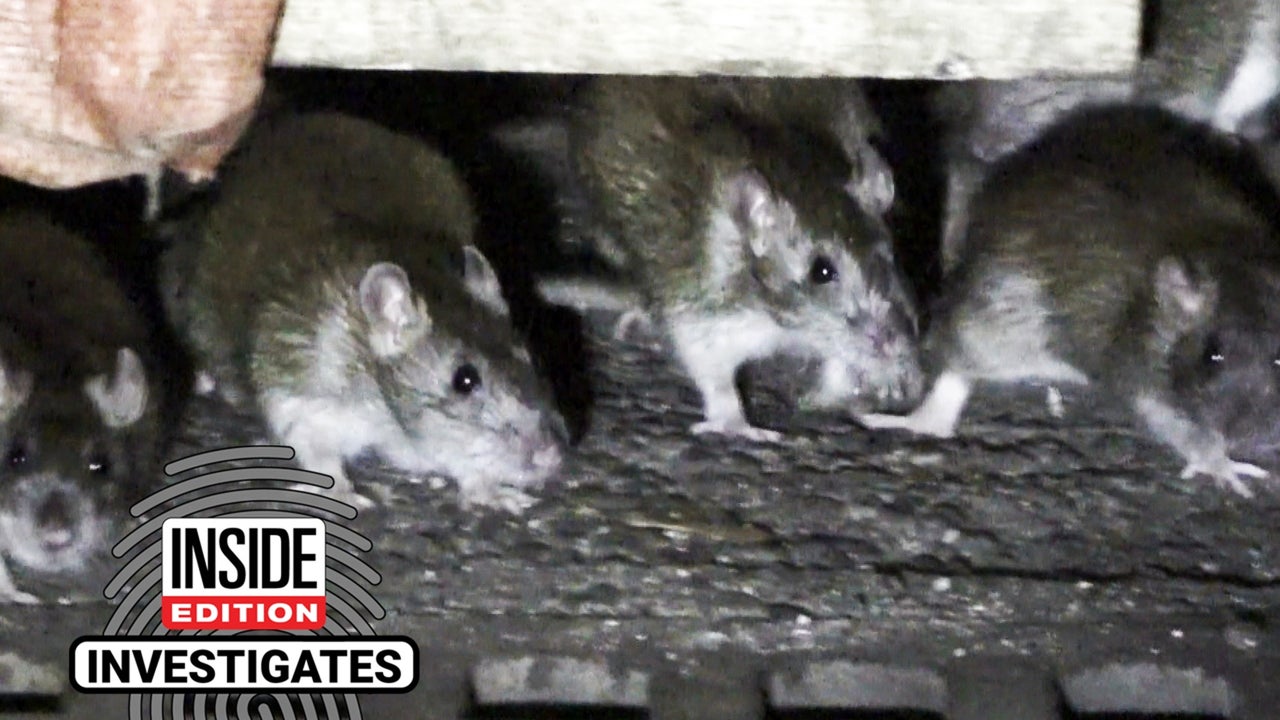 The Inside Edition rat patrol is back! Some outdoor dining sheds have become a haven for furry vermin after hours at New York eateries. “This is a rat’s dream come true,” exterminator Paul Barletta tells Inside Edition.

www.insideedition.com
Some Outdoor Dining Sheds Have Become a Rat's Paradise After Hours in New York City

The Inside Edition rat patrol is back! Some outdoor dining sheds have become a haven for furry vermin after hours at New York eateries. “This is a rat’s dream come true,” exterminator Paul Barletta tells Inside Edition.​

Outdoor dining has been a godsend to restaurants struggling during the coronavirus. But as it turns out, it’s also a great place for rats to live and multiply.
After hours at some New York City dining sheds, rats are having their own dinner parties. Inside Edition's rat patrol found the disease-carrying vermin in different parts of the city.

At Miriam, a popular eatery in Brooklyn, we spotted them scurrying all over the outdoor dining area in search of leftovers. Miriam did not respond to Inside Edition's requests for comment.
Stewart Waldman has lived in New York City for over 30 years and says he's never seen the problem as bad since the outdoor dining sheds went up.

“Do you think that these restaurant sheds have added to the number of rats in your neighborhood?” Inside Edition's Lisa Guerrero asked Waldman.

“Without a doubt,” he said.
Our flashlights also caught rats running around the outdoor dining area at a pizza joint in midtown Manhattan. The manager at B Side Pizza said the rats didn't come out when the restaurant was open, but he acknowledged that they show up after the restaurant closed for the night.

“We do a thorough cleaning everyday before the shift and we have an exterminator that comes out every week,” the manager said.
But, of the restaurants we checked, nowhere was the problem worse than at Arriba, Arriba. Their tasty tacos are a New York favorite. And after hours — the rats agree.
But the restaurant says it is aware of the issue.
“We have recently taken the whole thing down and cleaned everything out and poured cement,” manager Brent Reil told Inside Edition. He says they're doing everything they can to get rid of the rats, which he calls a city-wide problem.
“All over the city it's happening,” Reil said.
Exterminator Paul Barletta of SWAT Pest Control in New Jersey says these types of outdoor dining areas are very conducive to attracting vermin, especially if trash is left in and around them overnight.


“This is a rat’s dream come true,” Barletta said.
And although it takes constant work, he says restaurant owners can keep rodents away with a vigilant pest control management program. The restaurants we spoke with say they use pest control companies to try to get rid of the rats.

Staff member
Talk about getting dragged.

Talk about takeout! Garbage truck hauls off outdoor dining shed in Greenwich Village — with person inside!

BY THE VILLAGE SUN | Sacré bleu! A garbage truck on Monday evening mistakenly scooped up an outdoor seating shed in front of a French restaurant in Greenwich Village — with a diner inside of it! A Twitter user, Scootercaster (@ScooterCasterNY), posted a video from the scene, interviewing the... 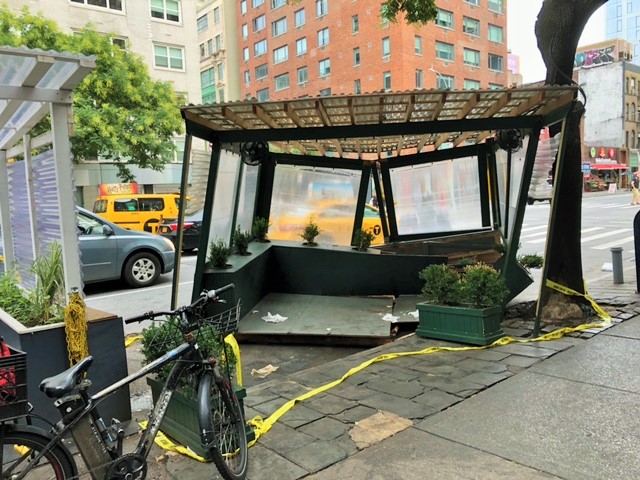 Talk about takeout! Garbage truck hauls off outdoor dining shed in Greenwich Village — with person inside!​

Sacré bleu!
A garbage truck on Monday evening mistakenly scooped up an outdoor seating shed in front of a French restaurant in Greenwich Village — with a diner inside of it!
A Twitter user, Scootercaster (@ScooterCasterNY), posted a video from the scene, interviewing the restaurant’s manager, who confirmed that a garbage truck making a pickup had “dragged” the shed for about 10 feet and that a patron had been inside. The diner was unhurt, she said.

Adding to the chaos, coming up from their protest at Foley Square, a group of teachers and others who oppose being forced to get the coronavirus vaccine marched past the French eatery’s totaled shed while chanting slogans.
“Antimandates March just went by a crime scene,” Scootercater tweeted. “A sanitation truck attempting to pick up garbage picked up and dragged an outdoor dining structure while someone was inside. Incident occurred at West 13th and 6th Avenue. The diner was uninjured but shaken.”
“It was shocking, definitely felt like an earthquake almost,” the bistro manager said of the frightening incident. “I was worried for the safety of our customers and everyone involved.”

She said she was disappointed to hear that Bar Six would have to handle the cleanup of the wreckage and that the city would not help out.
“The police came out to inspect it [and file a report]…but then it’s our responsibility apparently to clean up the mess,” she said. “I think the city should definitely get involved and be responsible for helping us to clean up the street.”

Staff member
On a Thursday evening at 6:30PM 3 days from May, on and around Thompson Street by Bleecker/West 3rd. A fraction of the totally empty dining sheds littering the area. Also many with one table being used. In total I saw about 20-25 seats being used out of hundreds. 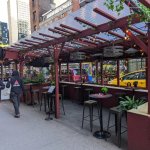 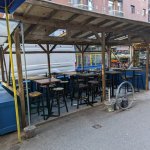 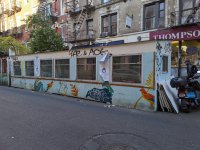 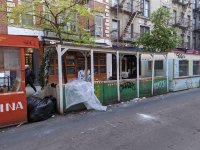 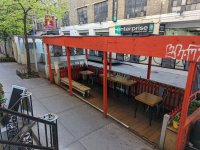 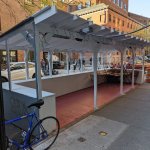 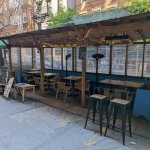 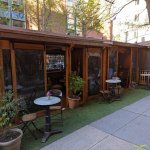 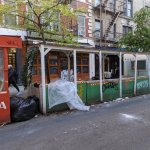 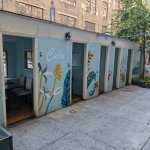 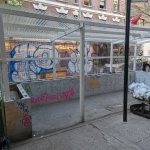 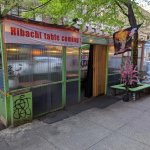 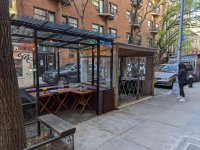 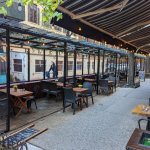 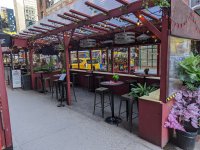 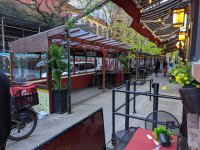