JPMorgan Chase & Co. is marketing some of its Manhattan office space as the company re-evaluates the future of its workforce.

JPMorgan to sublet office space as it ponders work-from-home​

JPMorgan Chase is marketing a big chunk of its Manhattan office space as the company re-evaluates the future of its workforce.
The New York-based bank is looking to sublet about 700,000 square feet at 4 New York Plaza in the Financial District and more than 100,000 square feet at 5 Manhattan West in the Hudson Yards area, Bloomberg News reported. Brokers at JLL are marketing the space.

The move comes as JPMorgan is building a skyscraper to replace its Park Avenue headquarters. The tower will be one of the city’s largest.

“It is too early to comment on specifics as we continue to learn and adapt to this current situation and how it impacts our commercial real estate needs,” Michael Fusco, a JPMorgan spokesman, said in an email to Bloomberg. “We are committed to New York and are planning for the next 50 years with our new headquarters here.”

JPMorgan has been consolidating its New York City workforce while expanding elsewhere in recent years. Chief Executive Officer Jamie Dimon said in a Bloomberg TV interview Monday that a “large portion” of the bank’s workers will permanently be based in offices but that a hybrid model may allow some employees the option to come in part-time or not at all. Manhattan office availability reached an unfortunate new record of 15.5% in February, according to Colliers International.

February’s leasing activity was half of January’s​

The rise in supply is simply outpacing demand.
Manhattan’s office availability set another unfortunate record at 15.5 percent in February, up 0.6 percentage points from January and 5.6 points from a year ago, according to Colliers International’s monthly market snapshot.

Total space leased in February was 900,000 square feet, down by 51 percent from the volume in January and by 57 percent from a year ago. The total was also 43 percent lower than the 2020 monthly average volume of 1.58 million square feet.

But future office needs became uncertain as working from home became the norm, and many office tenants opted for a short-term lease extension or postponed decisions altogether.
Signs of recovery, notably vaccine distribution, are reassuring tenants that things are heading in the right direction.
“As there’s more clarity in the air, they would be more likely to — instead of a short-term solution because of not being sure of what’s taking place — re-engage the market,” Wallach said.

But demand is likely to be outpaced by supply in the near future because a big chunk of new office space is scheduled to be added to Manhattan inventory: 1.5 million square feet at Brookfield’s 2 Manhattan West and 1.3 million square feet at Tishman Speyer’s Spiral, both in the Hudson Yards neighborhood, Wallach said, citing CoStar.
David Goldsmith
Associate Broker
Bank Neary Realty
David@BankNeary.com
212-633-2727 x213
D Nearly Half of NYC Workers Could Return to Offices By Fall

A new survey from the Partnership for New York City found that nearly half of NYC office workers could be back at their office buildings by the fall.

It’ll still be some time before Manhattan’s office buildings are even close to being full again, according to a new survey of big employers.
Nearly half of the companies surveyed expect that employees will be back in offices by September, according to the report from the Partnership for New York City, which was first reported by Gothamist.

As of early March, just 10 percent of Manhattan office employees have returned to the workplace.
The survey also found that 8 percent of employers will require their returning workers to be vaccinated, while 61 percent will not.
“The overwhelming message is that both employers and workers are uncertain as to when they’re going to come back to the office and under what circumstances,” Kathryn Wylde, the Partnership’s CEO, told Gothamist. “From an employer standpoint, they’re very concerned about the mental health, stress, burnout impact of Covid. Many of them feel that they cannot put any more pressure on their employees in terms of the expectation of them coming back to the office, even though most of the CEOs I know would like to have the team back.”

The study, which was conducted between Feb. 24 and March 8, surveyed 174 companies with 209,000 office workers.
The pandemic forced a majority of office workers to switch to remote work at the onset of the health crisis, and some experts believe the trend of working-from-home or work-from-anywhere is likely to continue even after the pandemic.

What’s Going to Happen with All that Empty Office Space?​

A big majority of employees in New York said they’d prefer working from home and not return to the office. Companies might not always oblige, but lots of empty office space is now a given.​ 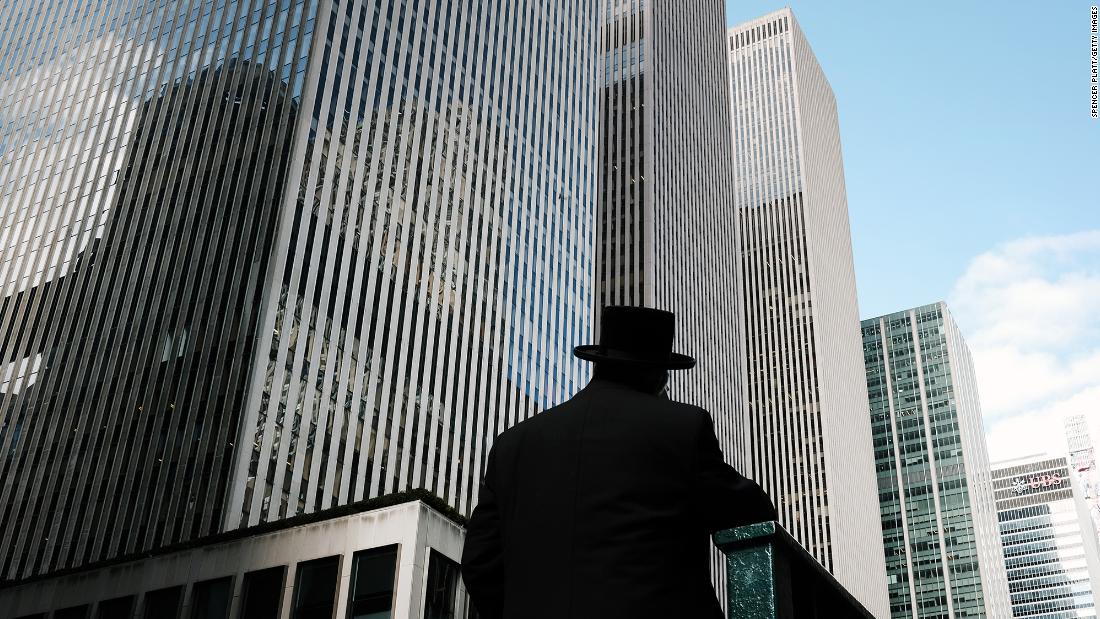 Vacant office space in New York City is the highest in nearly three decades and will likely hit "unprecedented levels" in the coming months.

Cushman & Wakefield expects vacancies to continue to increase to "unprecedented levels in the coming months." However, the report also notes that rising vacancies will drive asking rents down "substantially."

In fact, Manhattan's overall asking price for rents has declined for the past two consecutive quarters, falling to the lowest price per square foot in three years. But some analysts think that lower rents are not just due to demand, and that costs depend on the situation.

"Landlords have adjusted their expectations and are already being much more aggressive than they were before COVID," said Michael Cohen, president of the tri-state region at Colliers International. "But their specific reactions depend on their individual circumstances. For example, developers of newer office buildings are more likely wait to make deals if they don't want to lower their rents further."
David Goldsmith
Associate Broker
Bank Neary Realty
David@BankNeary.com
212-633-2727 x213
D

Manhattan’s quarterly leasing volume increased since the previous quarter. Meanwhile, the asking rent average decreased with negative absorption and record-high supply. The arrival of the COVID

Manhattan Office Report
Lowest Quarterly Asking Rent Since 2018
At $73.23/SF, Manhattan’s asking rent average decreased – for the fourth consecutive quarter – by 1.6%, the lowest quarterly average since 2018. The asking rent average was lower in Midtown and Downtown, quarter over quarter.

The asking rent average in Class C inventory ($50.52/SF), meanwhile, dropped by 4.1%. Year-to-date, the average weighted rental abatement
period for new deals and expansions grew to 13.5 months compared to 12.7 months as the full-year average in 2020. The average abatement period for renewals increased to 7.6 months compared to 5.3 months in 2020. Meanwhile, the average tenant improvement allowance for new deals/expansions decreased by 9.8% to $107.72/SF, while the allowance for renewals decreased by 21.0% to $27.82/SF.

The arrival of the COVID-19 pandemic drove New York City’s unemployment rate from 4.2% in March 2020 to a record-high 20.2% two months later.

After July 2020’s 18.8% figure, the unemployment rate tightened for five consecutive months, decreasing by 7.2 pp (percentage points) to 11.6% in December. However, the January and February 2021 unemployment rates were higher, increasing to 13.1% and 13.2%, respectively.

Staff member
This is when we start hearing how bad it really got and perhaps still is in some sectors. However, I almost wonder if these headlines will start to drastically change in the coming months/quarters given the recovery in sales sector, will the markets be forward looking and only care about the trend ahead?
D

Staff member
These type of commercial transactions tend to be much larger, done more on numbers/less on emotion, and more by Real Estate professionals based on better information. So similarly to how I look at decisions by Sponsors to turn condominium projects into rentals, Extell shedding numerous projects they had in the development pipeline, and various other Sponsors finally dropping prices and moving product, I look more at where the "professionals" are betting their own money as opposed to trying to talk up the market.
Last edited: May 6, 2021
David Goldsmith
Associate Broker
Bank Neary Realty
David@BankNeary.com
212-633-2727 x213
D The Manhattan office availability rate in April hit yet another all-time high, this one 16.5 percent, and rose for the 11th straight month.

Manhattan’s office market reached another new record last month, but it wasn’t one any landlord would boast about.
Office availability rate in the borough climbed to 16.5 percent in April, the highest it’s ever been, according to Colliers International’s monthly market snapshot. Despite falling Covid cases and rising vaccinations across the city, availability in the borough has steadily ticked up since the start of the year.
April was also the 11th consecutive month Manhattan’s availability has climbed, eclipsing the 16.1 percent record set in March. It also stands in contrast to April 2020, when the figure stood at 10.3 percent, according to the report.

Another notable new lease was law firm Bracewell LLP’s 54,000 square feet at Paramount Group’s 31 West 52nd Street. With that 16-year deal, Paramount backfilled about 40 percent of its vacancy in the 29-story office tower.
There was one small bit of good news. Net sublease availability across the borough decreased slightly — 30,000 square feet — for the first time since May 2020. Manhattan sublease inventory in April was 21 million square feet, about a quarter of the total office availability in the borough.
David Goldsmith
Associate Broker
Bank Neary Realty
David@BankNeary.com
212-633-2727 x213
D Deutsche Bank is considering return-to-office plans that would make it one of the most flexible employers among large international banks.

More bad news for commercial landlords: Deutsche Bank is considering return-to-office plans that would make it one of the most flexible employers among large international banks.

Under the proposal, employees would be able to work from home up to three days a week, Bloomberg News reported. The bank is also “moving to provide our employees some additional flexibility in hybrid working models,” Chief Financial Officer James von Moltke told Bloomberg Television Wednesday.

Though location-specific plans have yet to be made, they will likely have an impact on Deutsche Bank’s real estate assets. The lender said in its quarterly report Wednesday that it expects “further savings” from the accelerated “rationalization of its real estate portfolio.”
David Goldsmith
Associate Broker
Bank Neary Realty
David@BankNeary.com
212-633-2727 x213
You must log in or register to reply here.
Share:
Facebook Twitter Reddit Pinterest Tumblr WhatsApp Email Share Link
Top