How will Coronavirus affect the market? 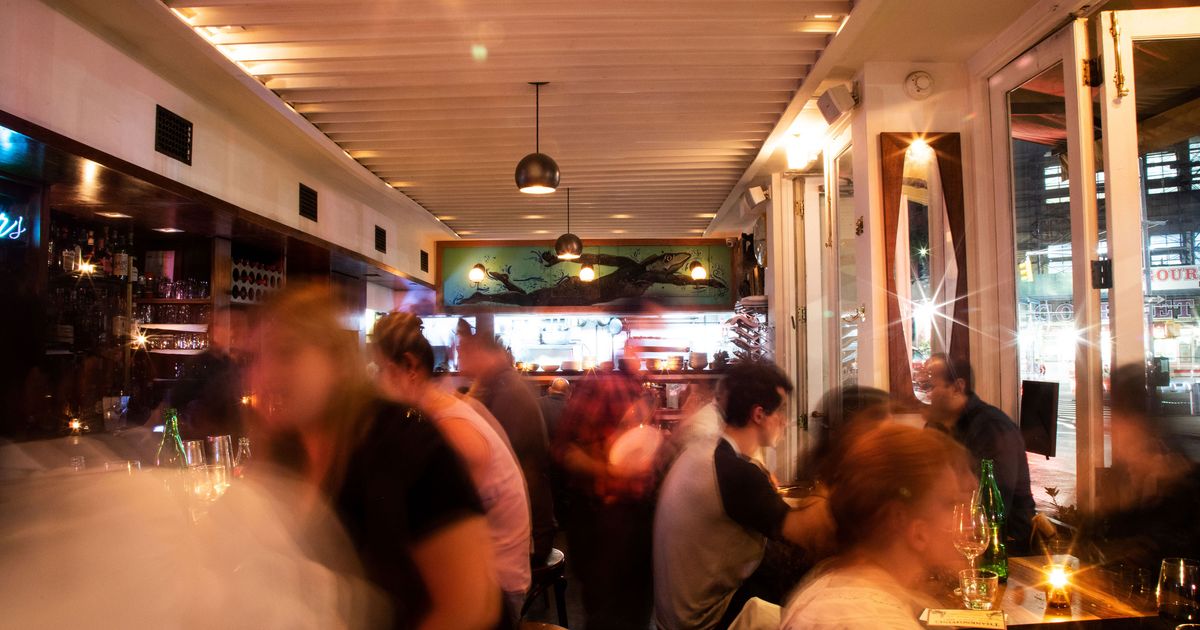 How Much Worse Will It Get for New York’s Restaurants?

It feels like we’re watching the collapse of an entire industry in real time.

www.grubstreet.com
How Much Worse Will It Get for New York’s Restaurants?
The last proper restaurant meal I ate before the COVID-19 pandemic began ravaging the country, upending daily life as we know it, and killing tens of thousands of Americans was lunch at Thai Diner, a downtown breakfast counter that — true to its name — combines some of the best parts of the American diner experience with dishes, techniques, and ingredients from Thailand. In practice, the combination works tremendously well, and it’s safe to assume there has never been another restaurant quite like it. On the day I dropped by, the place was jammed, in part because its owners, Ann Redding and Matt Danzer, built a truly dedicated following with their first restaurant, Uncle Boons.

That following is so loyal, in fact, that it was a bit shocking when we got word yesterday that Uncle Boons will never reopen. It was also shocking when that news was followed a few hours later with the announcement that Gabriel Stulman will permanently close his restaurant Bar Sardine at the end of the month. And in Williamsburg, it appears the cocktail-and-oyster bar Maison Premiere is a goner, as well.

Well-liked bars and restaurants have been shuttering for months now, but as this pandemic drags on with no end in sight, the pace of these announcements feels like it is only accelerating, and the profile of the affected businesses continues to grow. Taken as a whole, it’s hard to shake the feeling that we are now watching the collapse of the entire New York City hospitality industry in real time.

The data that is available is, really, incredibly bleak: Nearly 200,000 food-service workers are jobless, and now face a future without the enhanced unemployment benefits upon which many depended. Eighty percent of restaurants could not cover their full rent back in June, and things have only gotten worse since then. Nobody can say exactly how many restaurants and bars will be forced to close permanently, of course, but every available prediction currently boils down to “most of them.”

If operators have landlords who are sympathetic to the reality of the situation, they might have a shot at hanging on. Increasingly, it is clear that many landlords are not. As Delores Tronco-DePierro, who has been forced to close her popular new West Village restaurant the Banty Rooster, told us, her proposal for a new, tenable rent structure was met with a landlord telling her she isn’t in the business of subsidizing tenants’ lease agreements. (The economic fallout is going to get worse — it just is — so where do landlords think their new, moneyed, rent-paying tenants will come from?)

And while it is abundantly clear that bars and restaurants need and deserve a bailout, it is ominous that one does not appear to be in the offing. Instead, the only new solutions being offered to full-service restaurants are the ability to sell alcohol to-go and expanded “outdoor dining.” What happens when the temperature cools off and people head back inside? What happens when winter arrives and, if the predictions are correct, the infection rate begins to surge even more?

Among all of the other news, concerns about restaurants can often feel slight. These businesses are, by design, distractions from the rest of the world, and in normal times there are always issues that feel more urgent. But New York City’s restaurants and bars comprise an industry that just recently employed more than 315,000 people. What happens when they’re all jobless, and the city’s storefronts remain vacant for years? These are not slight concerns.

Speaking to New York Times restaurant critic Pete Wells, the chef Greg Baxtrom, who has radically rethought his restaurant Olmsted over the past few months, says his only goal is to make it to next spring “without losing everything.” But what really happens in March or April? There will be a vaccine, maybe, and there might be something like a renewed sense of optimism, hopefully. But in order to get there, we will first have to make it through an exhausting, maddening winter. Without some kind of help, it is only going to get worse — much worse — before we can even begin to talk about how it gets better.
David Goldsmith
Associate Broker
Bank Neary Realty
David@BankNeary.com
212-633-2727 x213
D

Staff member
At this point practically every single news source is running some version of the "record number of Manhattan vacancies" story. I have a hard time coming up with the scenario where this doesn't lead to lower prices in both the rental and sales markets.
David Goldsmith
Associate Broker
Bank Neary Realty
David@BankNeary.com
212-633-2727 x213
D

Staff member
The problem with using Median Price of Contracts/Sales to gauge effect of COVID-19 on sales/prices:

Let's say you had a buyer who started looking to buy an apartment in January 2020 for $2.2 million. They continued their search through August 2020 and finally bought something. What price did they buy at? Probably $2.2 million. They didn't change their price range due to decreased prices, they just bought "more" apartment. In the short term median sales price is more of a gauge of what the buyer pool is than the change in what "same unit" apartment sales prices are. Same unit sales prices could be down 5% or 25% and still leave median sales price unchanged short term, and COVID-19 effects are still certainly short term.
David Goldsmith
Associate Broker
Bank Neary Realty
David@BankNeary.com
212-633-2727 x213
D

Upstairs Realty said:
One of my sellers is TOM, one is renovating in preparation to sell, and my two active sellers requested that I stop holding Open Houses a couple of weeks ago. If someone wants an appointment to see those properties in the next week or two, I will probably ask the sellers to show rather than ride the subway "unnecessarily" myself.

I would, however, note that there are concerns that need to be balanced. Most of the people call for near-complete shutdowns are salaried.

Here in the gig economy, if I don't close deals my kid doesn't eat. And I'm in a better position than my friends in the arts are; they generally know that they can't work at all. Handing sixty billion dollars to the airlines won't help any of us.
Click to expand...

I would really love to get an update on what happened with the 4 properties.
David Goldsmith
Associate Broker
Bank Neary Realty
David@BankNeary.com
212-633-2727 x213
D NYC Construction Spending Will Drop Due to Covid-19

According to a new report by the New York Building Congress, the pandemic has shaved $16 billion off projected construction spending in 2020 and 2021.

therealdeal.com
Pandemic may wipe out $16B in construction spending: report
New York Building Congress slashes projections for this year and next
The pandemic has shaved $16 billion off projected construction spending in 2020 and 2021, according to a new report.
The New York Building Congress estimates spending will reach $55.5 billion this year, down from the $65.9 billion the group previously forecast. Next year, spending will be just about flat at $56.9 billion, which is also a drop from the trade group’s earlier estimate of $62.1 billion.
The group does not see 2022 as a comeback year, either: Spending will drop back down to $56.1 billion, the construction industry trade group’s report foresees.
The analysis points to the months-long shutdown of non-essential construction in the city during the pandemic, as well as the broader economic downturn gripping the region, as the source of the lower spending forecasts. Much of the drop can be attributed to decreases in spending in residential and non-residential (including office, retail and hotel) development.
Conversely, government spending on projects was forecast to increase this year and the next, despite massive pandemic-related budget deficits at every level of government and the big public authorities. The Building Congress forecasts that such spending will hit $21.1 billion in 2020, up from $19.7 billion the previous year, and then $23.1 billion in 2021. It will level out in 2022 at $21.9 billion, according to the report.

The Metropolitan Transportation Authority says it will have to cannibalize its capital program if the federal government does not answer its request for a $12 billion bailout, and the Port Authority of New York and New Jersey is seeking $3 billion from Washington.
Average construction employment between 2020 to 2022 is projected to drop 14 percent from the levels of 2017 to 2019. According to the Building Congress report, 128,200 construction jobs will be created in 2020. That’s projected to rise to 136,650 in 2021 and 140,200 in 2022. Interesting.... could land costs, construction costs, and money costs get low enough that we could see a new dev flurry despite the market? Build it now, sell it later?
D

Staff member
Back in June 2019 when the Rent Stabilization law changed I posited that construction costs were going to go down because of the decrease in jobs. Now with the decrease in new construction as well it's hard for me to think General Contractors and materials suppliers aren't going to get squeezed into eating some of their profit.
David Goldsmith
Associate Broker
Bank Neary Realty
David@BankNeary.com
212-633-2727 x213
D September was the cruelest month yet for tax revenue generated from real estate sales.
The number of transactions has slumped, draining city and state coffers of vital revenue, according to a report released Thursday by the Real Estate Board of New York.
All told, the city and state have missed out on $755 million in tax revenue this year as tax receipts have fallen by 42 percent from last year. Tax revenue is responsible for 53 percent of the city’s operating budget, although property taxes, which have remained steady, bring in far more money than transfer taxes.
The biggest drop was in office sales, which fell from $1.5 billion in September 2019 to $641.9 million in September 2020 — a 56 percent decline, the report found. The size of each transaction, which can easily extend into hundreds of millions of dollars, offers a windfall in good times. But when the market goes quiet, the effect is equally pronounced in the opposite direction.

Condominium sales volume dropped 31 percent over the period, from $1.1 billion down to $779.2 million.
Transaction revenues, however, are just one piece of the real estate tax pie. Property taxes, which are New York City’s largest single source of revenue, rose from March through August by 3.9 percent to $16.3 billion, Bloomberg News reported.
As a result, the city’s tax revenue fell by 3.5 percent from March through August compared to the same period last year, a smaller drop than expected. Mayor Bill de Blasio has sworn off raising property taxes as a way to fill the budget gap created by the pandemic. He has been seeking a federal bailout to avoid slashing the city’s $88 billion budget.

There is one bright spot: Transaction revenues were up 13 percent in September from the month prior, suggesting a recovery could be on the way.
David Goldsmith
Associate Broker
Bank Neary Realty
David@BankNeary.com
212-633-2727 x213
You must log in or register to reply here.
Share:
Facebook Twitter Reddit Pinterest Tumblr WhatsApp Email Link
Top