Staff member
The City has so many unfilled municipal jobs that Mayor Eric Adams recently announced a "use it or lose it" ultimatum to department heads. A certain percentage of each municipal agency's unfilled positions will be permanently eliminated.

This is problematic because most agencies have been unable to fill large numbers of positions for several years.

But I have a better solution to the problem:
Currently we have CHIP and other landlord groups holding tens of thousands of vacant Rent Stabilized units hostage in an attempt to overturn HSTPA of 2019. Well actually they're trying to do with rent regulations all together! But I have a proposed alternative:
Force them to rent out these vacant units to new municipal hires. Imagine how many would apply for these jobs if they came with a $1,500 a month rent stabilized apartment? 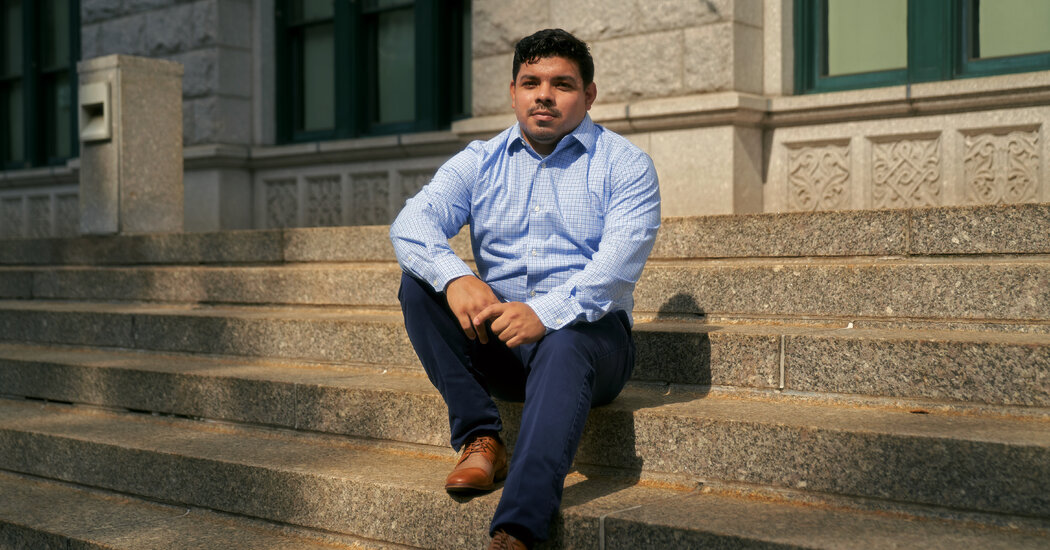 Why City Workers in New York Are Quitting in Droves

Competition from the private sector and the government’s balky hiring practices have prompted thousands to flee city government.

Working for the City When Everyone Else Is Leaving​

Mayor Eric Adams strode into Cipriani Wall Street, packed with the city’s civic and business elite, to tout a highly ambitious, thinly sketched plan to reinvigorate the city’s commercial districts. “We’re going to show the country why we are New York, and this new New York conversation is going to show how together we get all cylinders operating on the same engine to regain our economy, regain our city, and we leave no one behind,” he said. That plan would include more bus lanes, electric-vehicle charging stations, and converting official buildings to residential use. In recent weeks, he announced an even more aspirational goal to build 500,000 housing units over the next decade. This would be a signature achievement for an administration that has, one year in, yet to find a legacy-defining policy to pursue, the equivalent of Bill de Blasio’s universal prekindergarten.
Yet a worsening crisis threatens these bold plans: There just aren’t enough people at the public agencies charged with running the city. The city comptroller’s office released a report in December that found the overall vacancy rate at municipal agencies is 8 percent, quadruple the 2 percent rate before COVID. Certain pivotal agencies are struggling much more. The Department of Buildings has nearly 23 percent of its positions vacant. City Planning is at 22 percent. Housing Preservation and Development (HPD) and Finance are each at 18 percent. Cyber Command, charged with protecting the city’s cybersecurity, is at 36 percent. Perhaps the most extreme case is the Department of Social Services’ Child Support Services division, which is almost half-empty. “There are empty desks and cubicles everywhere,” said one Department of Buildings employee who wished not to be named. “The morale is very low.” It doesn’t help the remaining employees that the mayor announced in November he’d be slashing some unfilled positions by as much as 50 percent.

Plenty of cities across America are grappling with similar shortages. City workers are lured away by private-sector salaries, especially those in specialized fields like law and engineering. Pandemic burnout has driven some younger employees out of the workforce altogether. The lure of a healthy pension 20 or 30 years down the line just isn’t enough to keep them coming to the office five days a week. (Federal employees can still work remotely, as can employees of other governments, like Connecticut’s.)

But what’s happening in New York is compounded by Adams himself. His firm line against hybrid and remote work for city employees, a continuation of de Blasio’s policy, is driving employees out. Salaries have been kept intentionally low for new hires and those transferring between the agencies and the City Council; applicants have been offered the very lowest salary possible on the pay scale. A strict public-sector vaccine mandate that allows few exemptions — also a holdover from de Blasio’s tenure — continues to weed out the 10 percent of adults citywide who are not completely vaccinated. Younger city workers say they are also discouraged by the degree to which many agencies are helmed by patronage appointees, people who mostly owe their positions to their connections with the mayor rather than professional experience. They include the now-former Department of Buildings commissioner Eric Ulrich (who resigned after being investigated for illegal gambling and alleged mob ties) and the Department of Transportation commissioner, Ydanis Rodriguez, who doesn’t seem to have the level of agency management or transportation experience of former heads, according to some staffers.
At HPD, which develops and maintains the city’s affordable-housing stock, it seems likely that the shortage will hamstring the Adams administration’s attempts to develop the new housing that the city desperately needs. On a day-to-day level, a depleted case-manager workforce is struggling to get low-income people into available housing. “We don’t have the people to keep up with all the work that we have,” said one former HPD employee, whose division oversaw Section 8 vouchers for 100,000 people. (The employee left over low pay and the lack of a remote-work option.) A current HPD employee, who also spoke on condition of anonymity, confirmed that case managers simply can’t keep up anymore. “On the case-processing side, the line staff, people are really fucking slammed by stuff. There are too many cases to process,” they said. “There’s a mountain that people have been digging themselves out of for a year or two with no end in sight.” It’s made worse by the fact that the starting salary for case managers is around $38,000, not much more than the city’s $15 minimum wage paid out over a year. If a case manager can’t help determine how much HPD will help with the rent, then landlords can raise the rent on tenants who should be qualifying for subsidies. “It’s mostly low-income people, immigrant families, and people with children who are affected by this,” the employee said. The consequences could be much bigger down the line; they also predicted that HPD could lose federal funding from the Department of Housing and Urban Development for its low performance.

At the City Law Department, attorneys are rapidly departing for the private sector, where salaries are much higher and remote work is tolerated. Head count has fallen by at least 22 percent. An attorney with the department said the biggest problem is that there are barely enough lawyers to comply with discovery requests and depositions when cases go to court. Failure to comply can lead to sanctions from the courts and lost income for the city. Because of this, more cases are settled rather than litigated in court. The affirmative litigation division has withered too: The government can’t bring as many cases against those who have damaged city property or broken contracts.
“We are losing experienced lawyers and not attracting new ones because we are not able to compete right now,” the attorney said. “I’ve had colleagues from law school and other lawyers reach out, express interest, who always liked government law and might be interested in the work we’re doing. When they hear what the situation is really like and look at the pay and lack of flexibility, they’re not coming here.”
Adams, in an effort to address this gap, has announced a fellowship to bring in private lawyers to city agencies, with salaries paid by the outside firms. However, employees say that the fellowship isn’t going to stem the tide of departures or bring enough lawyers so the department can function at anything close to its pre-pandemic capacity.

Even agencies that don’t rely on specialized workers are struggling. At the Department of Cultural Affairs, program officers who process grant applications for cultural and art nonprofits are disappearing. One of the remaining officers has a caseload of 160 to 170 organizations, when the officer typically had a little more than half that number before Adams was mayor. This has translated to monthslong delays that employees only expect to worsen in 2023. “There’s no motivation here to be the best worker you can be,” said one Cultural Affairs employee.
Eager employees who want to make their mark in city government — to be a part of something big or memorable — see a stark difference between de Blasio, who was derided in the press but promised progressive governance on a large scale, and Adams, who has shown much less interest in expanding early child care or strengthening the city’s social safety net.
“It’s really hard to recruit really skilled people,” said one high-ranking agency employee. “People are willing to come into government if there is a vision and goal everyone is working toward. What are you working toward? You couple that with inflexibility with work-from-home, it’s a deal-breaker.” When the administration does make headlines for its big ideas — the ones that Adams announced at Cipriani, for example — agency employees wonder how they’ll be executed with diminished and demoralized staff.

Comptroller Brad Lander says Adams should embrace remote work to make the city more competitive. But he said the mayor can go even further to prioritize recruiting. He pointed to Michelle Wu, Boston’s mayor, who has designated a chief talent officer to draw city workers and fill vacancies. Adams has a rat czar, so why not a hiring czar? “Some cities and states have been aggressive in trying to address this, and New York has not,” Lander said. “Maybe the opposite.”
However, Adams’s spokespeople say there is no problem. “Mayor Adams has built a diverse and highly talented team that is laser-focused on delivering results and getting stuff done for New Yorkers,” said Fabien Levy, a spokesman for Adams. “The city has faced no operational impact to services with the vacancies that exist, but we are recruiting aggressively for every vacant position.”
While it’s true that there are still more than 200,000 municipal employees and no immediate danger of the kind of mass exodus that would bring government itself to a halt, the bigger risk is what happens later down the line. Lander, for example, wonders whether the lack of personnel at Cyber Command will expose the city to a devastating hack. Or if a building could collapse, one day, that was never properly inspected.

And what about Adams’s ambitious agenda? The former employee at HPD says leadership is still trying to rally the remaining workforce behind grander goals. But the shortage of employees has made it near impossible to push for them.
“No one buys it anymore. No one cares. They’re not saying what we want: a little more pay and remote work,” the employee said. “If leadership is not listening, what’s the point?”