Staff member
Looks like Billionaire's Row isn't the only place for (close to) 50% discounts.

In contract a 4 Beds apartment in Manhattan's Chelsea for $10.47M. Find a Professional to help you price this property, collaborate and find similar

Sold 2 Beds apartment in Manhattan's Sutton Place for $2.0M. Find a Professional to help you price this property, collaborate and find similar

Staff member
Is the market this hot?

Staff member
Here is and indicator of how hot the high end of the market is right now: David Goldsmith said:
I think it's more that the two buildings share something:
Being known as the "it building" of a moment in time. Out of the box a good number of high profile buyers came on board. Most notably Sting in both buildings. We saw what happened when that wore off at Limestone Jesus. Will the same thing happen at the "curated" Chateau de Roth after he doesn't get to hand pick the buyers on resale? Only the future will tell.
Click to expand...

Seems like another celebrity building with a bunch of recent turnover, especially for penthouses, and at elevated numbers. With the celebs exiting will it affect the bloom on this rose in the future? 443 Greenwich St.: 443 Greenwich is the restoration and transformation of a historic 19th-century book bindery factory into 21st-century luxury residences... 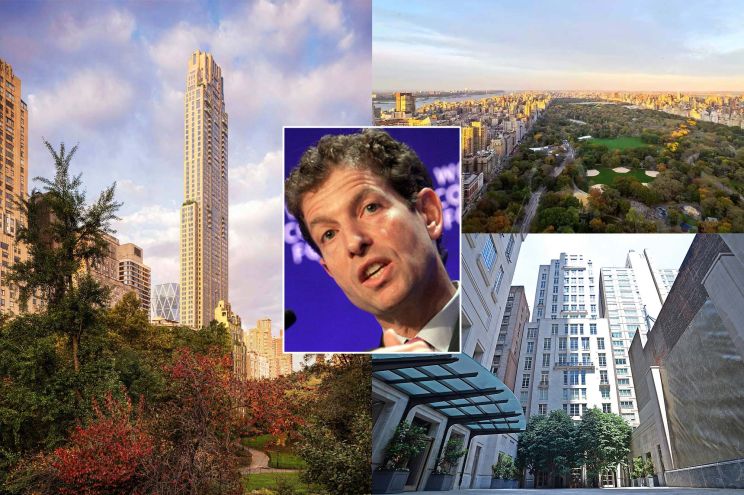 
The Och-Ziff Capital Management founder has sold his penthouse at 220 Central Park South for close to $190 million to mystery buyers —that’s almost double the $93 million he paid in 2019. He paid an additional $2 million for a one-bedroom unit on a lower floor, although it’s unclear whether or not the small unit was included in the sale.​

The sprawling four-bedroom property is more than 9,800 square feet and comes with stunning views.
“It’s in turn-key condition,” an inside source told Gimme.

220 Central Park South is the wealthiest condo tower in city history.Robert A.M. Stern Architects
The limestone clad building is has been one of the most successful new construction efforts in city history — a sort of 2.0 version of 15 Central Park West. Robert A.M. Stern once told Gimme that both buildings —220 and 15CPW — are part of the same family.
“They belong to a family of forms, but like in any family, each child is a little bit different,” Stern said.
Och still has a residence at 15 CPW, which he had put on the market for $57.5 million in 2019, the year he bought at 220 and moved to Florida for tax purposes. It is no longer on the market.

220 Central Park South is almost sold out and has already completed more than $1 billion in sales.
Buyers include Chicago hedge funder Ken Griffin, founder and CEO of Citadel, who already paid $238 million for multiple units in the middle of the building in 2019 — that price is still a record for a residential property in the U.S.
Griffin then paid an additional $3.9 million for two more units on the building’s 20th floor later that year. Combining the units is a long term project that is far from completion, sources say, leading some to speculate that Griffin was the buyer of Och’s penthouse.
Ken Griffin set a national sales record when he paid $238 million for units in the building.TNS

However, a Griffin spokesperson told the Post that he is not the buyer — though Griffin has been on quite the residential spending spree in recent years. buying up $875 million worth of homes in places like New York, Palm Beach and London.
His most recent purchase was a $75 million estate at 8 Star Island — which was a Miami record.
Other boldface names in the building include the musician Sting and his wife, Trudie Styler — who were also former residents at 15 CPW. Joseph Tsai, the owner of the Brooklyn Nets and the co-founder of e-commerce site Alibaba, paid $157.5 million for a two unit combo at 220 CPS.
The building boasts interiors by Thierry Despont. Amenities include private dining rooms, a gym, juice bar, library, basketball court — and top notch security.