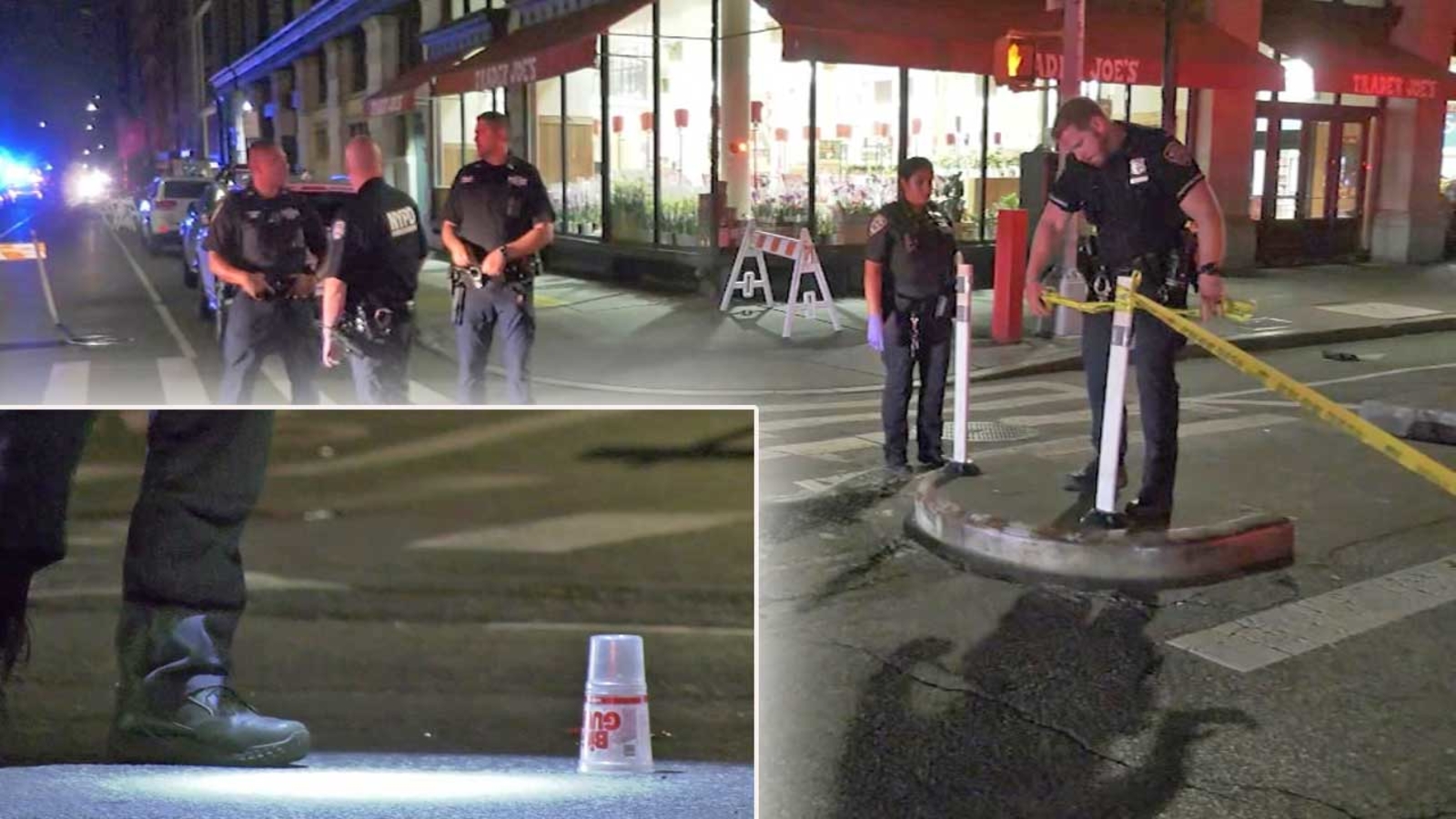 NYPD officers responding to robbery involved in shootout in Chelsea

This is the same location where a man was shot and a police cruiser struck by gunfire last week.

NYPD officers responding to robbery involved in shootout in Chelsea​

- Police officers got into a shootout while responding to a robbery in Chelsea early Friday morning.
It happened at 2:50 a.m. on West 21st Street at Sixth Avenue.
Plainclothes officers who were wearing NYPD windbreakers were working inside Club Doux when a bouncer told them a robbery was taking place in front of the club.
When the officers went outside and tried to intervene, police said the suspects fired at them.
The officers returned fire. No one was struck.

Two suspects fled in a silver Audi Sedan last seen heading westbound on West 21st Street, towards Seventh Avenue.
The suspects were generally described as wearing black hoodies.
Police found shell casings outside the nightclub.
It happened at the same location where a man was shot and a police cruiser struck by gunfire last week, on July 18.
West 21st Street was closed Friday morning between Fifth and Sixth avenues for the investigation, as was Sixth Avenue at 20th Street.
David Goldsmith
Associate Broker
Bank Neary Realty
David@BankNeary.com
212-633-2727 x213
@nyc_real_estate_guy Instagram

Hate crimes also saw a 50% increase year-over-year, with 54 crimes reported in July 2022 compared to 34 in July 2021. Hate crimes against the Jewish community saw the biggest spike, rising from 7 crimes reported in July 2021 to 15 in July 2022, a 114% increase.
“We know that any crime increase in our city is wholly unacceptable,” said Police Commissioner Keechant L. Sewell. “Everyone who lives, works, and visits here deserves to be safe, and the members of the NYPD will tolerate nothing less – but we cannot do it alone. When violent criminals are willing to carry illegal guns on our streets and brazenly shoot at innocent people, they must face real consequences. And when rampant, revolving-door recidivism erodes the public’s trust in the criminal justice system, we must make efforts to refocus that system on what matters most: the victims. All of us need to be pulling in the same direction, so that we can best deliver on the public-safety promise we make to every New Yorker, every day.”

Despite the rise in crime this month, the NYPD states that there has been an 8.7% decrease in the number of shootings year-to-date, with 63 fewer shooting victims throughout the first seven months of 2022 compared to the same period last year. The department also notes that murders year to date are down 4.2% through the end of July 2022.
David Goldsmith
Associate Broker
Bank Neary Realty
David@BankNeary.com
212-633-2727 x213
@nyc_real_estate_guy Instagram

Staff member
https://nypost.com/2022/08/08/major-crime-continues-to-surge-in-nyc-up-36-this-year-new-police-data/
Major crime continues to surge in NYC, up 36% this year: new police data
The latest NYPD figures show major crime remains up 36% so far this year – even though shootings and murders both saw a dip of about 10% as of Sunday.

“The politicians will say ‘Murder is down!’ and ignore everything else,” said Joseph Giacalone, a retired NYPD sergeant and adjunct professor at John Jay College of Criminal Justice in Manhattan.

“Meanwhile, everything else is God awful.”

“Usually, during these really hot times, you end up with more violence,” Giacologne said. “Maybe it was too hot. But everything else is going off.”
Data on NYC crime
According to NYPD data, major crimes in New York City are up 36% so far this year.

He pointed out that shootings and homicides were up in 2021. making the decrease less noteworthy.

“We’ve probably lost two decades-worth of crime reductions, and that’s the real shame,” Giacalone said. “All those years of hard work by the Police Department is all gone in one year.”
The number of murders dropped 8.1% and the number of people shot went down 7.4% so far this year, according to the NYPD figures.

A police officer with more than two decades on the job said any current gains by the department are likely to be erased.