As New York City political elites brag about their "urban utopia," reality shows it's nothing like that. Rather a dystopia as defunding the police and other progressive policies have resulted in a surge of violent crime. The city saw its most significant year-over-year increase in shootings and homicides in more than half a century between 2019 and 2020. Violent crime continues to plague the city today, as top Wall Street firms tell their employees to "dress down" to avoid being targeted.

At the Bank of America Tower in Midtown Manhattan, senior executives have told employees to "dress down" to avoid being targeted by thieves, according to NYPost, who quoted one bank employee who spoke with On The Money. Execs told employees to avoid wearing the bank's insignia on clothing as they commute to work.
Employees have been extra cautious about potential attacks after someone recently spotted a man wielding a knife near the office building. Bank of America is not the only financial firm in Midtown and Lower Manhattan to advise employees about surging crime and how they need to take precautions to avoid becoming a victim.
Citibank has offered employees private shuttles to avoid public transportation as violent crime becomes a significant problem. The city reported a 15% increase in felony assaults in November, compared with the same period last year. 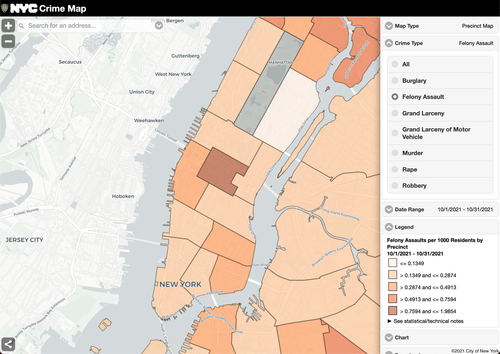 Another Wall Street source told On The Money the fear of being targeted on the commute home has "been a topic of conversation on the floor frequently over the last few months."

"Some people I work with have been accosted … I'd say it's becoming frequent, if not common," the source said. "There's probably a dozen incidents that I saw, or have been involved in," the person said — mostly verbal, but some physical, the person said.
Click to expand...

According to Kastle Systems today, whose electronic access systems secure office buildings in the metro area, only 28% of NYC employees are back in the office compared with 35% last month. The decline is due to the spread of the new COVID-19 variant.

Rising violent crime in the metro area could be the golden opportunity for some employees who've returned to the office but want to return to remote working status. Their excuse is that commuting to work is a life-or-death situation.
It's not just Wall Street bankers frightened about being targeted. College students are on alert after a Columbia University student was stabbed to death on Thursday.

NYC is becoming a liberal hellhole where violent crime will only worsen under progressive policies. For bankers who want to dress down, try incorporating the 'homeless' clothing line sold by elite clothing brands (Gucci makes $900 pair of sneakers that look like someone pulled them out of a garbage can).
73,558382 A deli worker was shot and killed during an attempted robbery in Brooklyn.

A deli worker was shot and killed during an attempted robbery in Brooklyn.

The incident was reported Tuesday night inside 803 Flatbush Ave. around 7:30 p.m.

Police say the victim was a 20-year-old man who was pronounced dead at the scene.

They say a person of interest is being questioned at this time.

It's unknown if they were responding to the scene or trying to take the person of interest into custody. 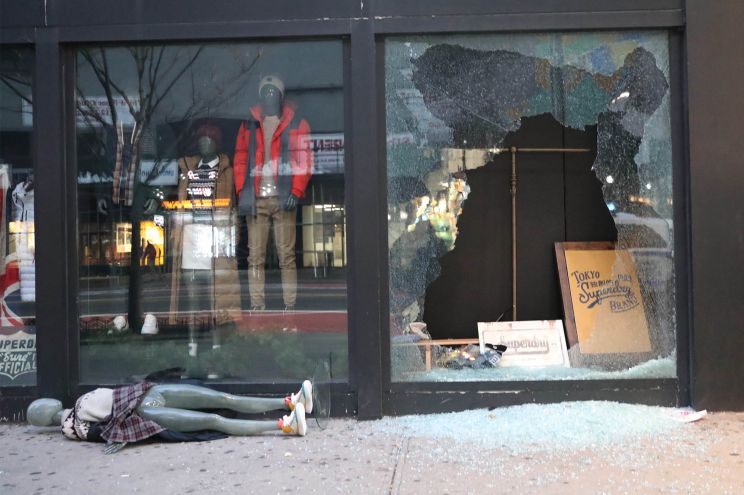 Shattered glass and a mannequin seen on the sidewalk in front of the smashed-in window of Superdry.G.N. Miller
Someone smashed into a display window at a trendy Herald Square store Sunday and made off with the mannequins’ clothes, leaving one plastic dummy on the sidewalk — and some tourists thinking they were stumbling on an actual dead body.
“I took an early walk with my mom, and we saw this broken window with all these police around, and we got all excited because you’ve got the NYPD investigating a break-in on one side of the street, and you’ve got the Empire State Building on the other side of the street, and how New York is that?” said Houston tourist Jennie Barios near the burglarized Superdry at 21 W. 34th St. across from Macy’s flagship store in Manhattan.

“Then my mom was like, ‘Holy s–t, there’s a body on the sidewalk!’ And I had to calm her down, I was like, ‘Mom, it’s just a mannequin.’ ”
A store worker said that whoever committed the crime probably got away with between $1,000 and $2,000 worth of clothing because the four mannequins displayed in the window were so heavily dressed in winter garb.
“Someone broke in and stole all the clothes off the mannequins — just the mannequins,” said the male store employee, who asked to remain anonymous because he wasn’t authorized to talk about the 5:51 a.m. incident. 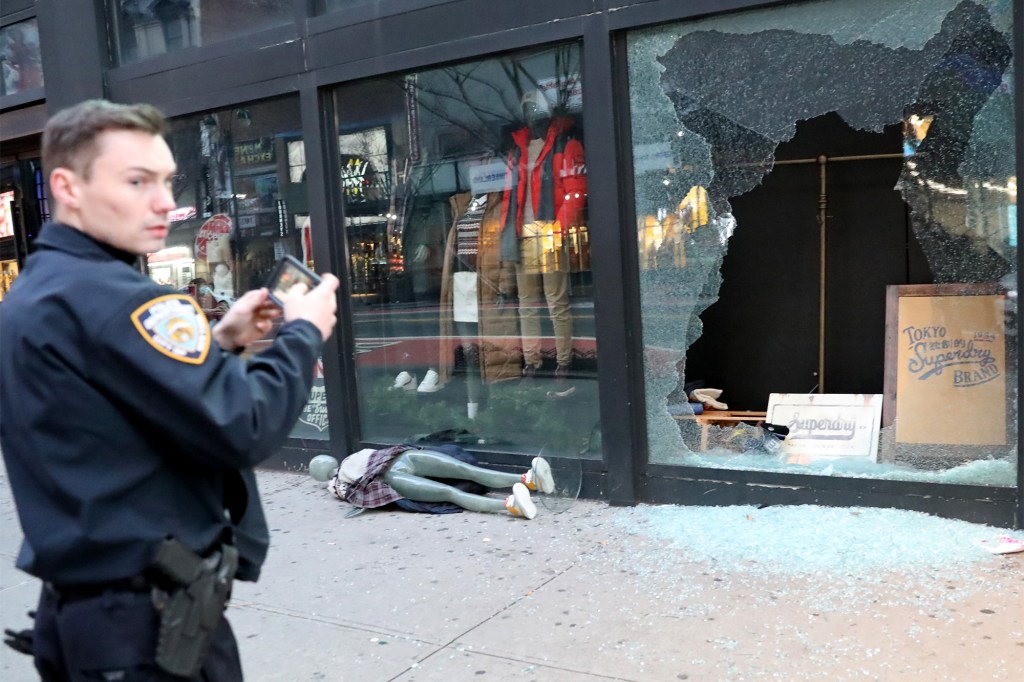 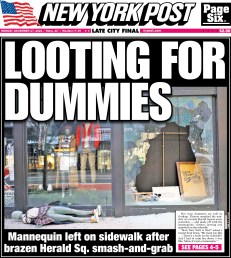 “They broke the window into the store, but they couldn’t get inside, just into the window display,” he said. “So they just took the stuff off the mannequins and ran.

“I was like, ‘Oh my God. Someone must have been late getting Christmas presents.’ Pretty desperate.”
The worker said he was informed of the theft in a work group chat when he woke up.
Photos show shattered glass strewn across the sidewalk in front of the smashed-in window and the mannequin sprawled like a crime victim next to it.
It was not immediately clear if anything had been stolen from the window display.G.N. Miller
Cops can be seen in one snapshot up-righting the mannequin, which was wearing a plaid skirt, yoke sweater, coat and sneakers.
Police said they are investigating the incident.

A 51-year-old man was shot during an apparent attempted carjacking in Forest Hills, Queens, Monday night.

A 51-year-old man was shot during an apparent attempted carjacking in Queens Monday night.

The incident happened on 72nd Road in Forest Hills, where police say the victim was shot around 9:30 p.m. after two men had demanded his car.

"My neighbor said, 'Please call 911, my husband has been shot," neighbor Gary Waldinger said. "They have two kids, and they were there. I can't even imagine how they are processing it."


Waldinger and his wife say they heard a loud pop -- loud enough that they knew something was wrong.

But the is not a neighborhood prone to violent crime, so they ran to their window.

Police say the two suspects were wearing gray hooded sweatshirts and had pointed their guns at the victim, who refused to give them his car.

He was shot in the wrist and grazed in the chest and was said to be conscious and alert as he was taken to Jamaica Hospital.

Neighbors say the family had just returned from a holiday vacation.