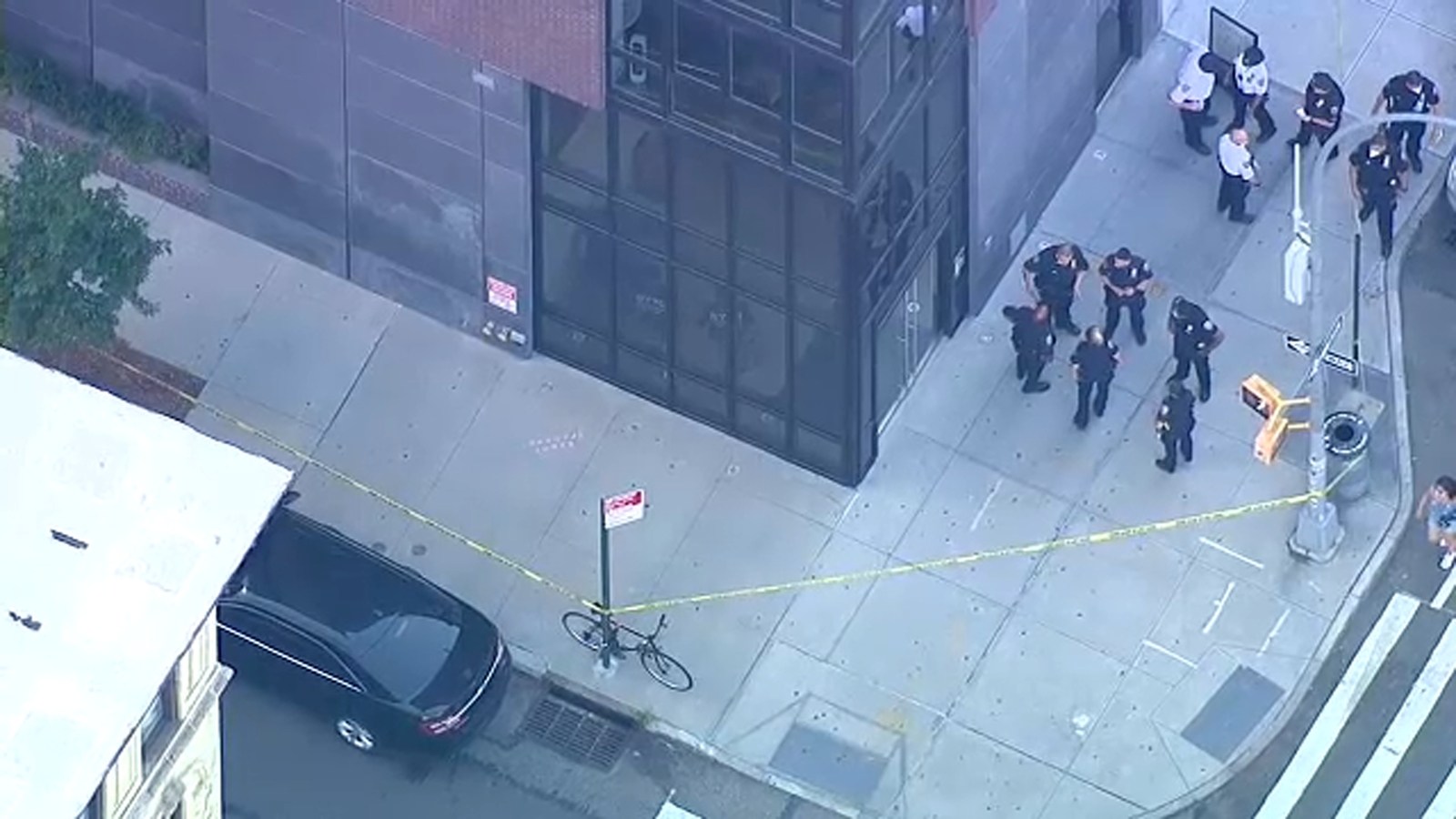 Sources tell Eyewitness News police have found a dismembered body inside a Lower East Side building.

LOWER EAST SIDE, Manhattan (WABC) -- Officials are investigating a suspicious death on the Lower East Side.

Authorities responded to the scene no the 7th floor at 365 East Houston St. just after 3:30 p.m.

According to a 911 call, a family member told police she found a decapitated body with limbs cut off.

The victim is a male and lived in the apartment.

Few other details were released.

Protestors on the Lower East Side Vandalize NYPD Vans

www.boweryboogie.com
Protestors on the Lower East Side Vandalize NYPD Vans
Posted on: July 28th, 2020 at 5:03 am by Elie 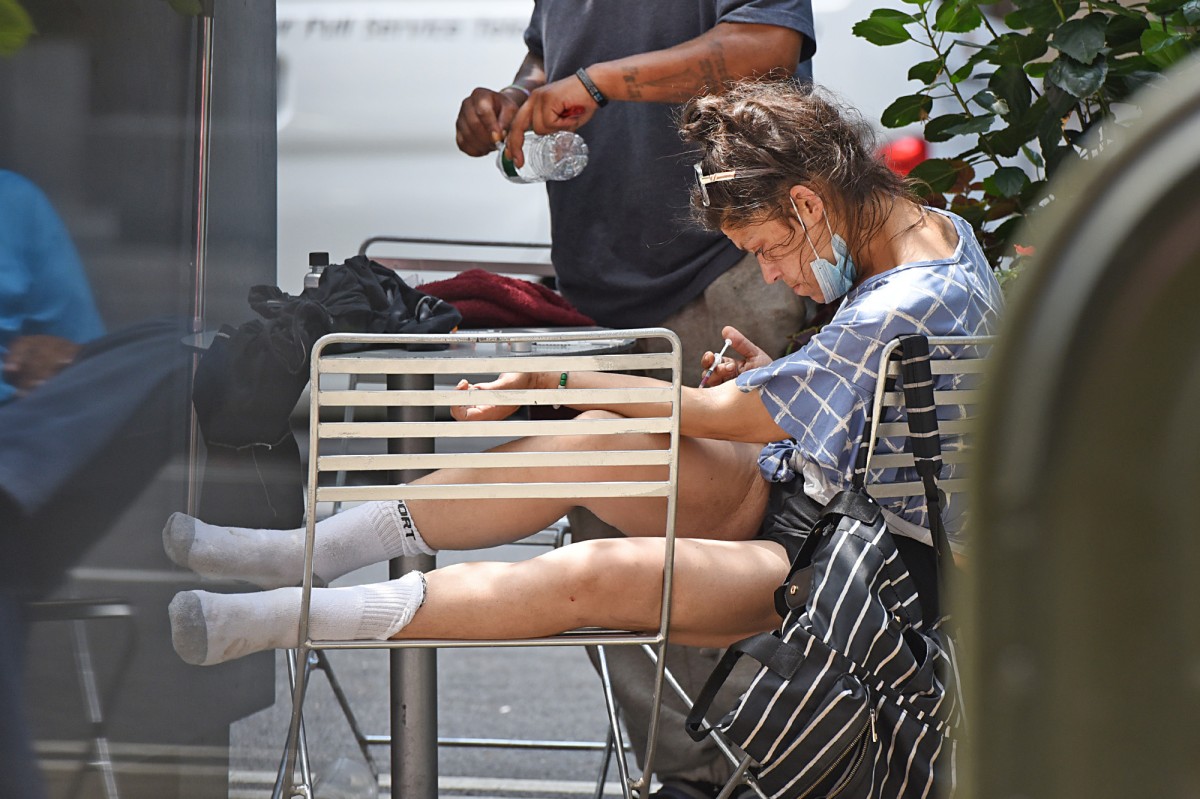 It’s the Great Black Tar Way. A cluster of junkies has turned Broadway into a shooting gallery, injecting drugs unhampered in broad daylight and then shuffling around in a zonked-out stupor, … 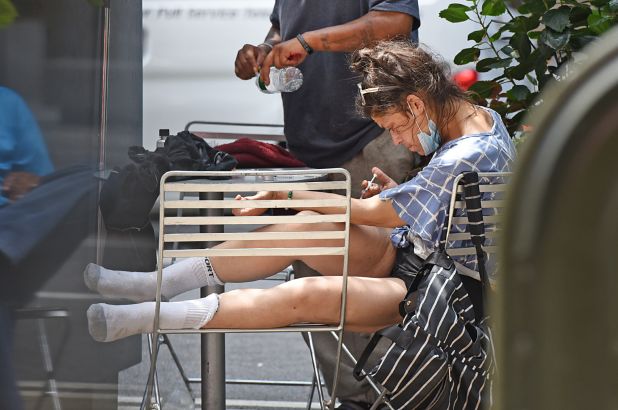 A woman injects herself with a needle near a pedestrian plaza at Broadway and West 40th Street in Midtown Manhattan.Gregory P. Mango
It’s the Great Black Tar Way.
A cluster of junkies has turned Broadway into a shooting gallery, injecting drugs unhampered in broad daylight and then shuffling around in a zonked-out stupor, seemingly oblivious to the Midtown bustle around them, The Post has learned.
If that wasn’t enough, the addicts are peppering the area with used syringes, turning individual planters on 40th Street and Broadway into mini needle parks.
“They’ve taken over the tables, blatantly using needles and shooting up heroin all day long,” said a local worker who asked that he only be identified as James. “There’s no police action, there’s no reach-out. There’s nobody preventing this, and you know we’ve had multiple calls to 311 but nobody really responds. It’s becoming a real problem.”

He called his own 311 calls “futile exercises.”
The Post spotted several of the spent needles dumped at the scene — and even caught one of the vagrants shooting up out in the open on Tuesday afternoon, with no one stepping in or saying a word. 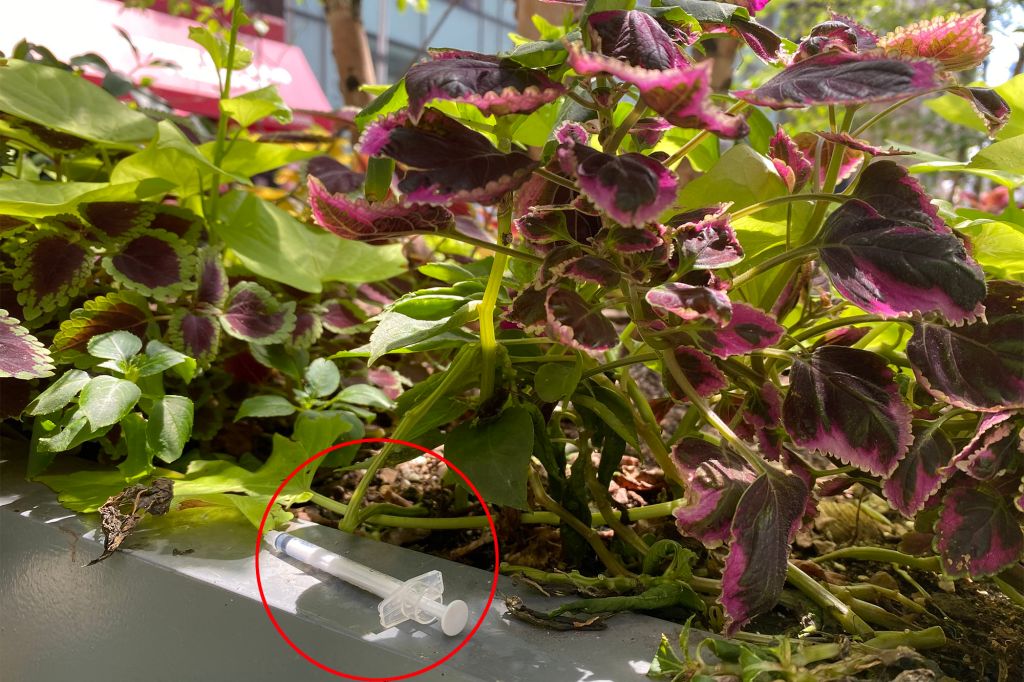 
A discarded syringe in planters on West 40 Street and Broadway in Manhattan.
Julie Coleman
Another photo from a local showed four people slumped over at one of the tables at the busy intersection earlier in the day, with drug paraphernalia clearly visible between them.

“In the morning, they start early in the morning,” said construction worker Edgar Rivera, who’s been working at a nearby site in recent weeks. “It’s almost always the same people you see around. It’s always the same ones all the time. They are, like, here every day.”
“We see them sleeping on the floor,” Rivera said. “Sometimes the ambulances come around here to help them out. It’s always the same guys.”
An employee for a private sanitation company who gave the name Jeff said he’s worked in the area for about six years and the situation has gotten worse.
An NYPD officer passes the table where the alleged drug activity was observed.Gregory P. Mango
“Disappointing the way they discard all the syringes. It’s not the safest,” he said. “In the last year, it’s gotten really bad. I’ve been seeing more syringes, discarded syringes, ever since they started coming in.”
In a statement late Tuesday, a City Hall spokesperson called the situation “entirely unacceptable.”
“We will do everything we can to connect these people with drug treatment and help so they can get their lives back on track,” the statement said.
Police said they have only received one drug complaint in the area over the past month, and the suspects were gone by the time cops arrived.
David Goldsmith
Associate Broker
Bank Neary Realty
David@BankNeary.com
212-633-2727 x213
D 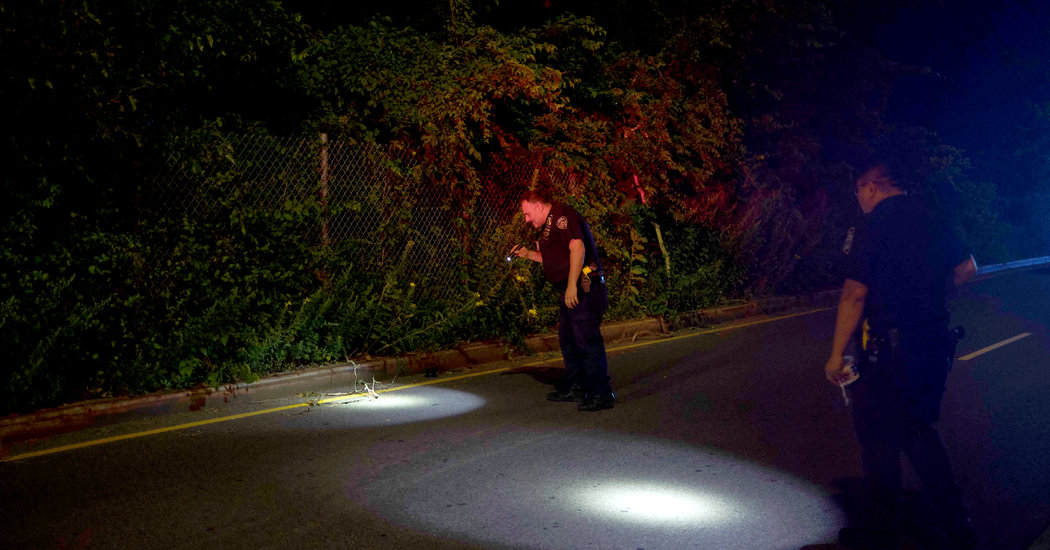 Shootings Have Soared. Is the N.Y.P.D. Pulling Back?

As shootings go unsolved, some elected officials think that officers are staging a slowdown. But the department says it is stretched thin.

www.nytimes.com
Arrests have declined drastically this summer, falling 62 percent across the board for the last four weeks compared with the same period last year, police data show. Narcotics arrests fell 85 percent. Detectives in the gang unit made 90 percent fewer arrests. There were similarly steep drops in the number of arrests by officers that patrol the subways and housing projects.

Gun arrests have dropped 67 percent during the same four weeks compared with last year, even as shootings have continued to spiral upward.

Some public officials who represent hard-hit parts of the city have accused the police of pulling back from their most basic responsibility — keeping the public safe — in response to the protests.
David Goldsmith
Associate Broker
Bank Neary Realty
David@BankNeary.com
212-633-2727 x213
D 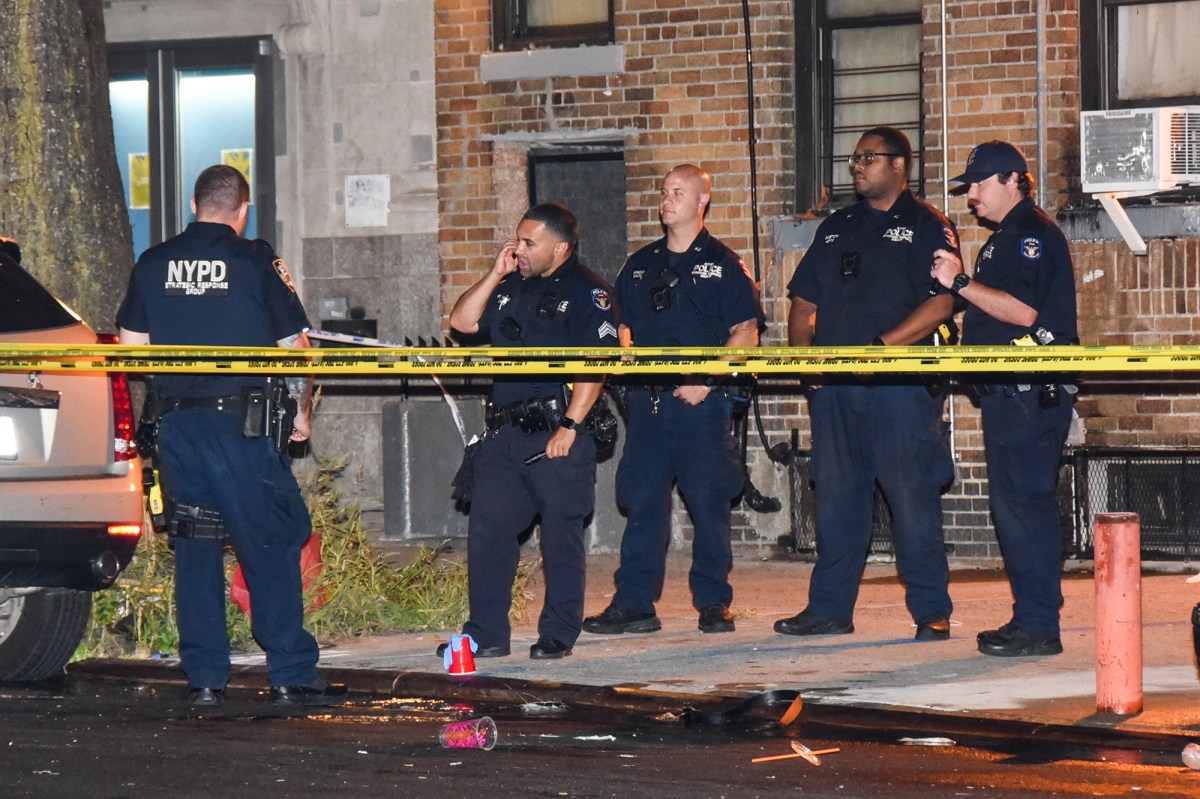 There have been 821 shootings and 1,000 victims as of Saturday, compared to 466 incidents and 551 victims for the same time frame in 2019, according to statistics released by the NYPD on Sunday.

nypost.com
Number of NYC shootings in 2020 close to totals for same period in past two years combined

The Big Apple is set to hit more grim milestones, with the number of shootings and gun victims so far this year set to match figures for same period the past two years — combined.
There have been 821 shootings and 1,000 gun victims as of Saturday.
Last year for same time frame, there were 466 shootings and 551 victims, while in 2018, there were 449 incidents and 548 victims.
That means combined, there were 905 shooting incidents and 1,099 victims for time period in 2018 and 2019 — close to the totals for this year alone, according to statistics released by the NYPD on Sunday.

This past week, there were more than twice as many shootings over the same time span last year, with 38 in the week ending early Sunday compared to just 16 over the same week in 2019, police said.

The number of murders this year did dip from last year, with four vs. eight for the week last year.
Police reported a dozen shootings late Saturday into early Sunday with three people killed — including a man who inadvertently flicked a cigarette at a group of men in the Bronx and was shot dead in front of his wife.
The new stats come just one week after police reported that the city had already surpassed the total number of shootings for all of last year, hitting the 777 three mark Aug. 1, topping the 2019 total of 776 for the entire year.
David Goldsmith
Associate Broker
Bank Neary Realty
David@BankNeary.com
212-633-2727 x213
D 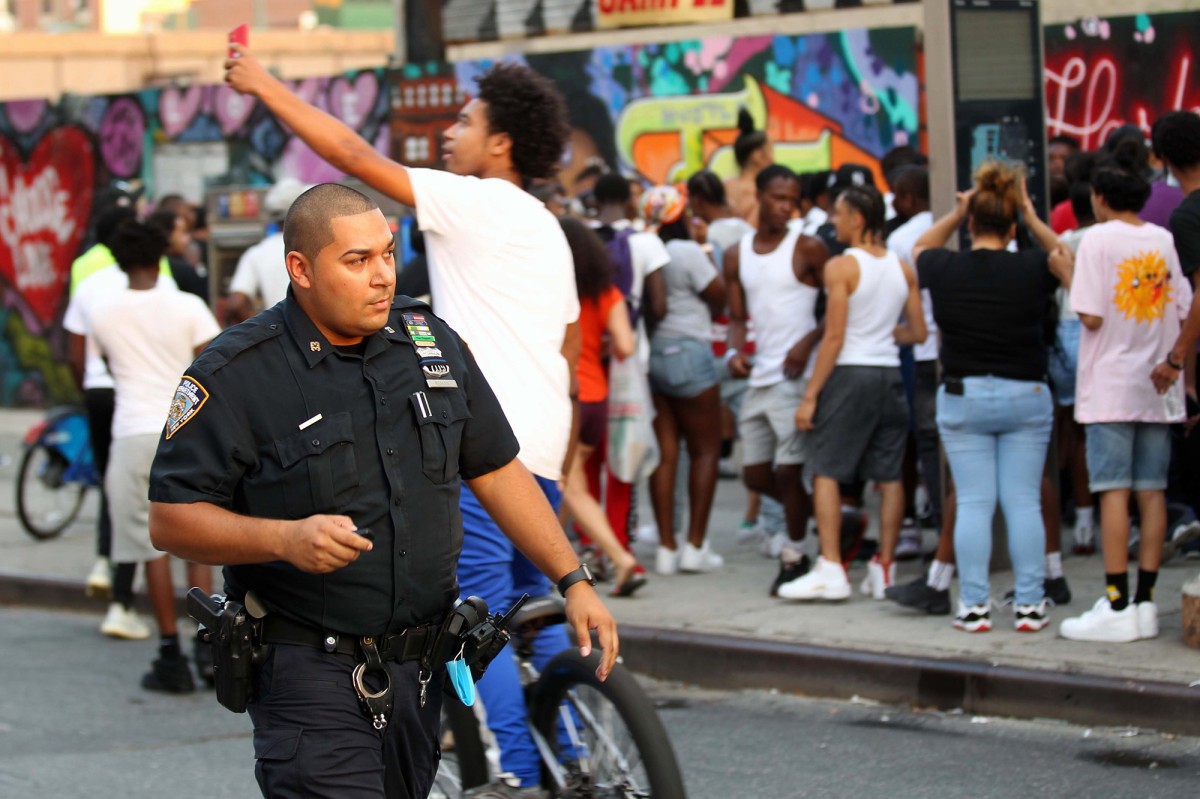 NYPD cops had a front-row seat to a five-on-one brawl — but let the violence play out rather than doing their jobs to break it up, The Post has learned. An 11-year-old girl was slapped, punched, ki…

NYPD cops had a front-row seat to a five-on-one brawl — but let the violence play out rather than doing their jobs to break it up, The Post has learned.
An 11-year-old girl was slapped, punched, kicked and even shocked with a stun gun by a group of five other girls after a basketball game around 7 p.m. Sunday on East 125th Street near Madison Avenue in Harlem.
During the roughly 4-minute beatdown, cops sat idly in nearby cruisers — but they didn’t get out until the girl was bloody and bruised, a Post photographer observed.

At least 20 police cars were nearby on the street — with at least one a little more than a car-length away, photos show.

Police sources told The Post the young girl was treated at Mount Sinai Hospital after being cut, bruised and shocked in the stomach with the stun gun. The girl told cops she didn’t know her attackers but knew two of their handles on social media, sources said.
An NYPD spokesman claimed the account witnessed by the Post photographer was “completely inaccurate.
“The officers were met by a large crowd while attempting to come to this person’s assistance. They were outnumbered. Projectiles were thrown at them. And they were forced to reposition and call every available resource in the area,” said rep Al Baker.
The department also tweeted footage it claimed to show people throwing bottles at cops who tried to intervene — though it was unclear when or where the footage was shot, and it does not show the girl being attacked.

But the Post photographer said he observed no bottles being tossed at police — though he was on the scene after hearing reports of an unruly crowd nearby some 45 minutes prior.
It was not known if any arrests were made in connection with the fight.
The hands-off approach comes as the police unions challenge a portion of NYC’s chokehold bill that makes it a misdemeanor crime to use any technique during an arrest that could limit breathing.
Top NYPD officials have also spoken out against the local reform, calling it dangerous, but have denied a slowdown — despite video leaking out from a weekly CompStat meeting capturing precinct leaders telling Chief of Department Terence Monahan that cops were “afraid” of facing charges over the law.
Over the last month, arrests have plummeted, with cops making nearly 60 percent fewer collars, according to NYPD statistics released Monday.
Cops are also pulling over fewer drivers, issuing a quarter of the normal speeding tickets — with the city’s speed cameras violation count holding steady.
David Goldsmith
Associate Broker
Bank Neary Realty
David@BankNeary.com
212-633-2727 x213
You must log in or register to reply here.
Share:
Facebook Twitter Reddit Pinterest Tumblr WhatsApp Email Link
Top