Brokers, REBNY, Zillow/StreetEasy At Odds In 2022 Citysnap, from REBNY in partnership with CoStar, has launched as a long-awaited public portal for residential listings.

The Real Estate Board of New York, in partnership with CoStar Group, launched a long-awaited public portal for residential listings.

Dubbed Citysnap, the platform is the first search site and app to feature all data from the RLS for both residential rentals and properties for sale.

The service potentially fills a void: the confounding absence of a citywide multiple listing service. Previously, infighting between major firms dashed hopes for one. This time, New York City’s largest brokerages stood united behind the initiative when it was first announced.

Douglas Wagner, a REBNY co-chair and director at BOND New York, said the brokerage community has “fought tooth and nail for years” for an “easy exchange” between a central listing inventory to brokerages’ internal operating listing systems.

The platform was created following the principles of “Your Listing, Your Lead,” meaning all leads from Citysnap listings will go directly to the listing broker or agent, with no additional cost or daily fee. REBNY’s more than 12,000 residential brokerage members will have free access to Citysnap Pro.

In addition to data, Citysnap offers detailed listing features, such as distance to nearby subway stations and details on the buildings in which each listed apartment is located. It also offers a Sky Cam feature, which shows over 50,000 360-degree aerial videos of residential buildings across the city.

Citysnap underwent a series of surveys, meetings and focus groups in preparation for its launch. Corcoran Group COO Gary Malin said the brokerage community has “rallied around” the platform, but persuading agents to make the switch might pose a challenge.

“Change is never easy for anyone,” Malin said. But “I think the agents really are going to embrace this. I think consumers will embrace this.”

Citysnap presents a challenge to StreetEasy, which has for years acted as New York City’s defacto MLS.

Eighty percent of people searching for real estate online in New York use StreetEasy and Zillow Group’s other consumer brands, according to a ComScore survey. StreetEasy says it received more than 180 million visits across its website and mobile apps in 2021, up over 20 percent from the year before and up almost 40 percent from 2019.

However, StreetEasy charges $6 a day for rental postings, along with fees for other features, such as agent spotlight and feature listings. The premiums, along with requirements that agents must post listings on the site prior to posting elsewhere, pose a burden to users and, with a free option now available, spell trouble for the listing behemoth.

“I can’t speak for StreetEasy because I think they’re more about monetizing everything,” said Bess Freedman, CEO of Brown Harris Stevens. “What Citysnap is trying to do is empower agents and make sure the consumer has transparent information right there and there’s no pay-to-play.”
David Goldsmith
Associate Broker
Bank Neary Realty
David@BankNeary.com
212-633-2727 x213
@nyc_real_estate_guy Instagram

Not sure what Citysnap is offering agents exactly? I "registered" (admittedly, I have yet to enter my first listing; I expect to do that later this week) and all I've gotten is ads offering me hundreds of dollars "off" a Google listing -- one that it looks like I could sign up for myself if I cared to.
Ali
---
Alison Rogers
Licensed Real Estate Broker
Upstairs Realty
email me at: upstairsrealty [at] gmail [dot] com
Broker "A" Member, Real Estate Board of New York

Staff member
I haven't seen any public facing ads, articles, etc which would drive traffic to this site. I understand how they think they will get traffic from REBNY members, but if they don't get a ton of traffic from buyers/renters what's the point?

Looking at a few sites which monitor web traffic the current statistics say Citysnap traffic is as of yet non-existent. I realize it's early in the game but they really need some sort of kickoff for the public. Take a look at the initial and continued spend by StreetEasy on PR, Google ads, etc.

Staff member
I'll add that their totally BS policy towards "data integrity" (because what would you really expect from an industry trade group?) is a lost opportunity because they could have had a competitive advantage with consumers by being the only consumer facing site which had only listings with accurate unit numbers, room counts, SF, etc.
David Goldsmith
Associate Broker
Bank Neary Realty
David@BankNeary.com
212-633-2727 x213
@nyc_real_estate_guy Instagram

David Goldsmith said:
I haven't seen any public facing ads, articles, etc which would drive traffic to this site. I understand how they think they will get traffic from REBNY members, but if they don't get a ton of traffic from buyers/renters what's the point?

Looking at a few sites which monitor web traffic the current statistics say Citysnap traffic is as of yet non-existent. I realize it's early in the game but they really need some sort of kickoff for the public. Take a look at the initial and continued spend by StreetEasy on PR, Google ads, etc.

I think the next phase is supposed to be when the consumer kickoff is , after members are on it...I downloaded the app, I have not yet invited any clients to it, trying to understand how it works before I invite anyone into it.
Nikki Beauchamp NYRS ® MCNE
Senior Global Real Estate Advisor
Licensed Associate Real Estate Broker
Engel & Völkers New York City
+1.212.616.7600 x 2521
@nikkibeauchamp on IG/Twitter
nicolebeauchamp.com
nikkisellsnyc.com
Work with Nikki

I sat through a web session with them. They confirmed what Nicole said: the ad campaign is coming. I tried to dive in and get what I can out of it but the upsell emails are obnoxious and the save search updates are enraging as they include irrelevant search results. I hope they are ready to shake this out as I would love an alternative to SE.
Jennifer M. Corcoran
Licensed Real Estate Salesperson
Project Management Professional
Master Certified Negotiation Expert
Realtor and Member of LIBOR & REBNY
Servicing New York City, Westchester, and Long Island
CORE
180 Smith Street
Brooklyn, NY 11201
C: 732-682-7871 The Real Estate Board of New York has discontinued its listing feed to Realtor.com.​

Listings will disappear from the site altogether as of Monday if REBNY was their sole distributor, according to an email from Realtor.com obtained by The Real Deal. The announcement said listings from Corcoran Group, Compass and Douglas Elliman and some smaller firms will continue to appear on the site.

A spokesperson for REBNY said the organization pulled its listings because Realtor.com refused to sign its standard data licensing agreement, which is required for other portals that display RLS listings and “ensures that our members’ data is protected.”
“While it’s unfortunate that Realtor.com declined to sign our data licensing agreement, brokerages participating on the RLS are still able to syndicate their listings through a direct feed to Realtor.com,” the spokesperson said.

The listings site is working with affected brokers and will “continue to display some for-sale properties in the New York City area through other listing feed sources,” communications director Stephanie Singer said in a statement.
The decision to end the syndication comes at a busy time for the listings landscape. REBNY last month announced the launch of Citysnap, its MLS website formed in partnership with CoStar Group.
REBNY began syndicating with Realtor.com in 2017 amid a dispute with StreetEasy, when the Zillow-owned listing site began charging brokers $3 for rental listings and refused to accept REBNY’s RLS listings. The price has since gone up to $6 per listing, though sales listings have always been free.

“We will not be taking a feed from the RLS,” said Susan Daimler, then manager of StreetEasy, “because we would characterize this as a clear move to restrict our efforts to provide consumers with the most robust real estate marketplace in New York City.”

Shortly after, 10 of the city’s top brokerages pulled their listings from StreetEasy, throwing support behind Realtor.com’s reach for market share. StreetEasy lost half its 32,000 rental listings and a good chunk of its sales listings.

StreetEasy had roughly 12,000 rental listings and 17,000 sales listings, as of Monday, and reports that 80 percent of consumers searching for real estate in New York used the site or other sites owned by Zillow.
But REBNY and the brokerages remain determined to create a StreetEasy alternative. Citysnap, backed by deep-pocketed CoStar Group, a commercial real estate behemoth, represents the most substantial effort to date. Brokers can list for free, and the platform promises to pass leads on to listing agents, rather than sell them to other brokers, like StreetEasy does.
David Goldsmith
Associate Broker
Bank Neary Realty
David@BankNeary.com
212-633-2727 x213
@nyc_real_estate_guy Instagram Zillow Group sees dark clouds on the horizon for its agent-advertising business.
The company predicted that a slowdown in home sales – in part due to a spike in mortgage rates – would hit one of its core businesses.

“Agents saw demand go down and longer cycles for their customers to close,” Zillow CFO Allen Parker said on the company’s second-quarter earnings call Thursday. “Their natural reaction at a time like this is to reduce their advertising spend somewhat as a protection.”
Zillow reported net income of $69 million in the second quarter, up from $16 million the previous quarter.
But the company’s shares fell after third-quarter guidance came in lower than expected. Zillow CEO Rich Barton said that “despite the challenges of the macroeconomic environment, we’re taking strides in key growth areas — including financing, touring and seller solutions — that get us closer to our vision of an integrated digital experience to help customers with all their real estate needs.”

The $505 million in revenue from Zillow’s homes segment beat expectations due to the faster than expected wind-down of the company’s iBuying arm, Zillow Offers. The company said earlier this year that the failed iBuying venture cost it $880 million in 2021. It also announced a partnership with iBuyer Opendoor, which it says will provide customers with a cash offer option. Customers selling through Zillow will be able to choose that offer or opt to sell traditionally; if they choose Opendoor, Zillow will get a referral fee.

“While almost everyone starts their journey using Zillow products and services, we monetize only 3 percent of real estate transactions,” Barton said.
When asked about CoStar Group’s new Citysnap MLS challenging Zillow subsidiary StreetEasy in the New York City market, Barton said Zillow feels “terrific competitively in New York”.
“We feel really good, StreetEasy is really the brand in New York City, it has incredibly high customer engagement, but maybe even more interestingly it is the platform that most brokers in New York City use to manage their inventory,” he said. “We’re in an incredibly strong position there.”
David Goldsmith
Associate Broker
Bank Neary Realty
David@BankNeary.com
212-633-2727 x213
@nyc_real_estate_guy Instagram

Like much of the industry, Zillow's mortgage operation, which includes Zillow Home Loans, has seen a steep decline in revenue and continues to burn cash.

Why it matters: Attaching mortgage is a key component of Zillow's "Housing Super App" and future growth strategy; the longer it falters, the less likely Zillow is to achieve its long-term aspirations. 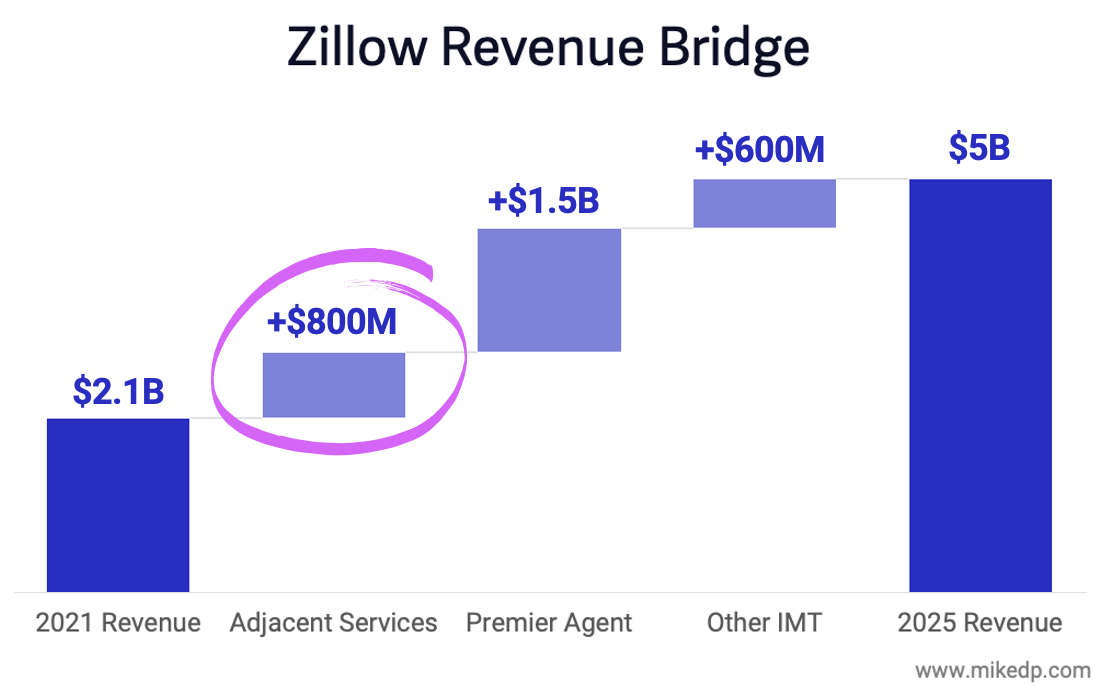 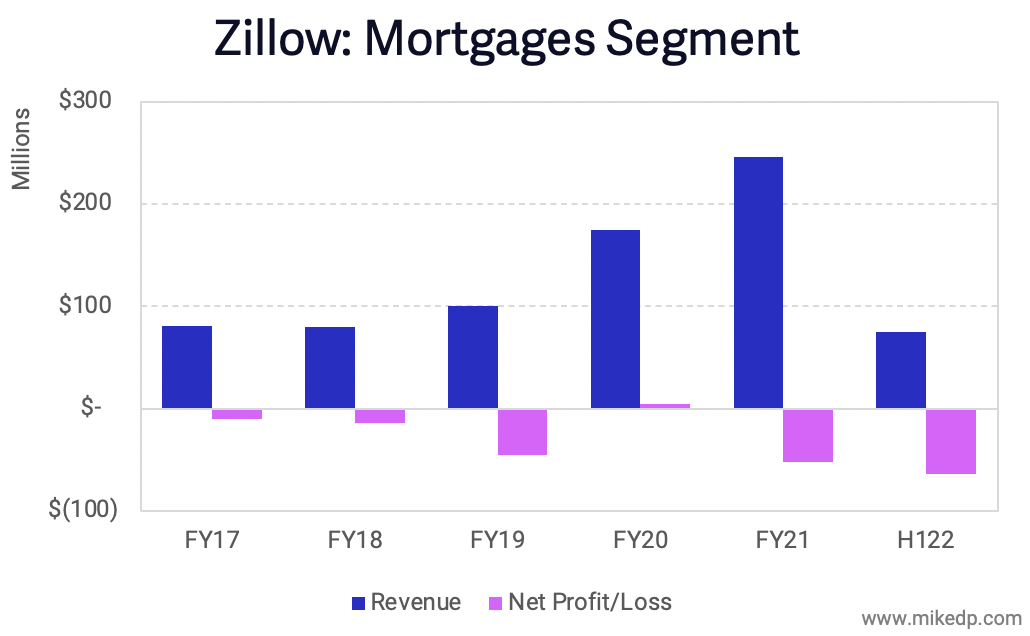