Booming sales in the first half of the year — when two-thirds of all new condos traded — gave way to high interest rates in the second. 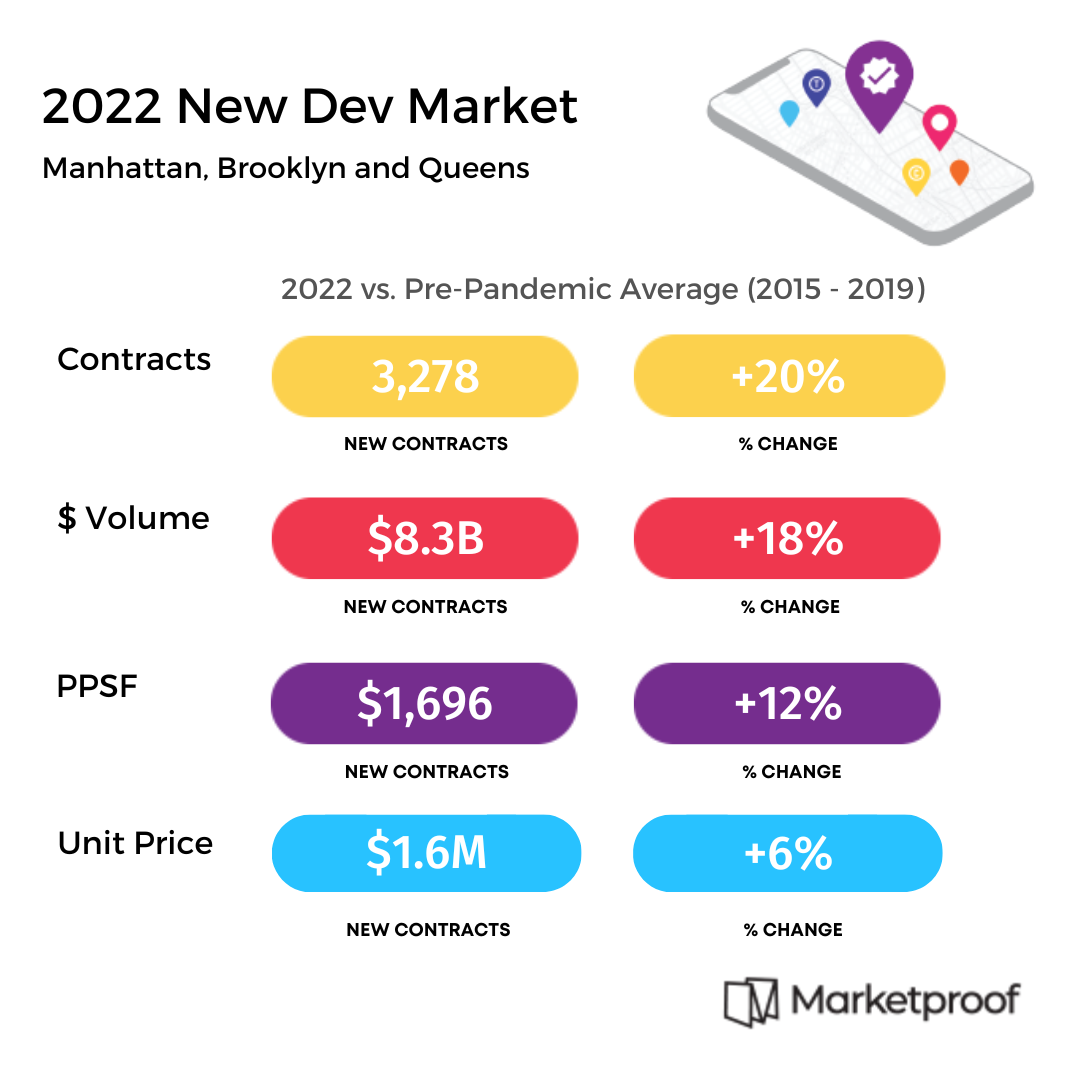 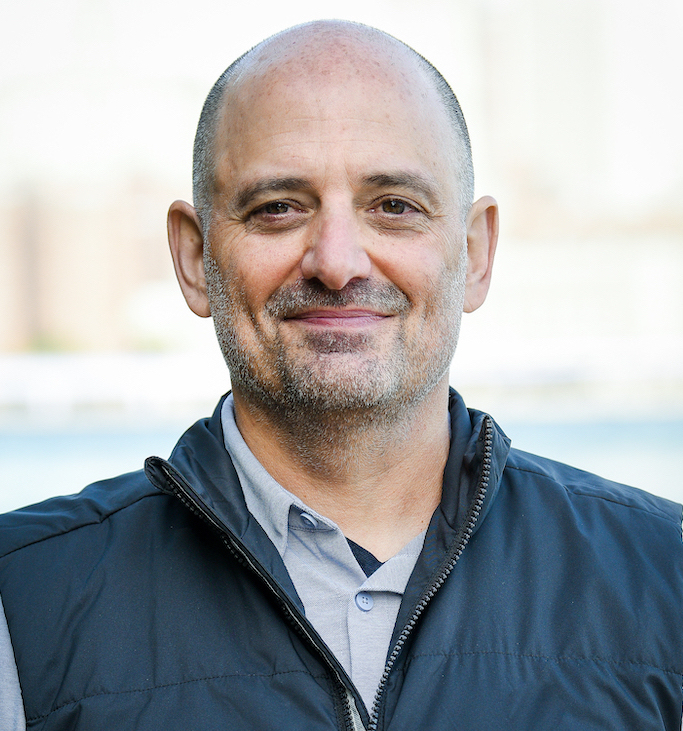 “At year-end, most metrics we track at Marketproof are higher than their pre-pandemic 2015-2019 average. But don’t let the numbers fool you. The market’s energy ran out in July, and activity levels dipped in the second half of the year. We expect, though, that demand will return to pre-pandemic levels by mid-2023.

For the buildings of the year, we have winners in four categories, towers, midsize, boutique, and top deals. Congrats to the teams at The Solaire, The Cortland, 208 Delancey, and Aman New York Residences for their #1 finishes. ”
Kael Goodman - Co-Founder and CEO of Marketproof, Inc.

The luxury segment, deals at $4M and above, echoed the increased demand witnessed in the broader market in 2022 compared to the period 2015-2019. Signed contracts were up 17%, from 432 to 507. Aggregate contract volume increased from $3.6B to $4.0B, a gain of 10%.
Although demand increased, the median luxury contract price dipped by 6% to $6.0M, and the median PPSF increased modestly to $2,690.
Like its total market counterpart, luxury in 2022 can be described by the dichotomy between the first and second halves of the year. Demand was well north of the pre-pandemic average during the first six months but slipped below that average during the second six months.

Compared to the pre-pandemic 2015-2019 average, demand for new development product increased in 2022. The number of signed contracts rose 15% from 1,484 to 1,701, with aggregate volume increasing 11% from $5.5B to $6.1B.
Median figures for the last asking price and last asking PPSF for contracted units increased as well, the former by 2% to $2,410,945 and the latter by 6% to $2,096. With a greater number of new dev offerings in Brooklyn and Queens at lower prices, Manhattan conceded some market share to the other boroughs.

As compared to the pre-pandemic average, the uptick in demand for Queens far outpaced that of its fellow boroughs. The result of more new developments and a number of buyers choosing Queens over Manhattan led to 51% more contracts being signed in 2022, bringing the tally to 364. Contract volume also increased 40% to $338M.
Although the median asking price for signed contracts dipped 6% to $817,500, the median asking price per square foot increased 10% to $1,300.


TOP SELLING BUILDINGS OF THE YEAR​

Marketproof created three categories – towers, midsize, and boutique – to highlight the buildings that inked the most contracts in 2022. We created a fourth category, “top deals,” to recognize those developments that closed the largest deals of the year. Congratulations are in order to the teams at The Solaire, The Cortland, 208 Delancey, and Aman New York Residences for their #1 finishes in each of their respective categories. Although it did not move enough inventory to make the cut, H7 Condominium is an honorable mention for selling out 92% of its units in 2022.

Staff member
Got this email today. Not so sure I would be bragging about selling less than 10% of a project in 2022. 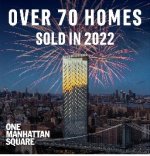 C’mon, don’t be such a sourpuss! It’s their best year yet: 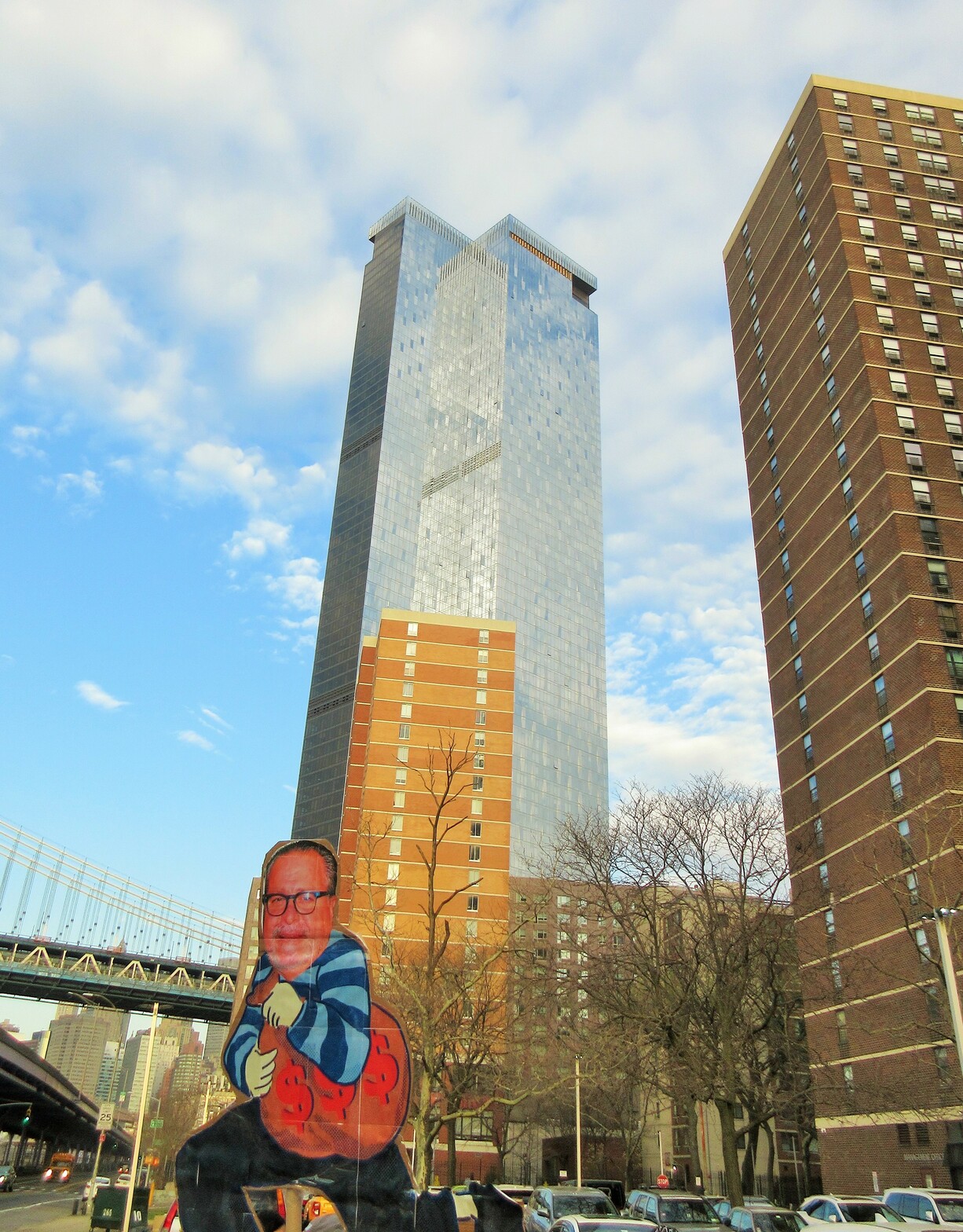 “It was the first supertall luxury building to go up in the area, and not only has it influenced several other big developers to plan large-scale projects nearby, but it’s found unprecedented success,” the site said. “Of note, sales velocity increased from 6.4 sales/month when sales commenced in late 2016 to 10.2 sales/month in early 2022, the third-highest in the city.
Click to expand... New York City developers had some pretty daring proposals in 2019, but three years later, here’s how the hottest projects fared. A photo illustration including several of the planned 2019 development projects (Getty, Vornado Realty Trust, Rudin Management, River Ring)
Developers had big plans at the end of 2019.
From supertalls that would push Manhattan’s skyline even higher to waterfront developments bridging the Big Apple with the beach, the hottest proposals of the pre-pandemic period promised to break records and precedent.
The three years that have followed ushered in a lifetime’s worth of change, and mixed results for the renderings we crowned the hottest of the time.
Here’s the latest on where those projects stand: A rendering of Tower Fifth (NYT)
Developer Harry Macklowe rang in 2019 by unveiling plans to top his 432 Park skyscraper with a 1,550-plus-foot Midtown office tower that would be the second-tallest building in the Western Hemisphere.

The developer in October 2019 landed a $192 refinancing package for three parcels, two of which are part of the assemblage intended for the proposed the billion-dollar supertall, dubbed Tower Fifth.
Demolition was later put on hold, New York YIMBY reported in Nov. 2020. The outlet reported new renderings at the time showed the tower set on a pedestal, which would house access to elevators and retail tenants.
The potentially record-breaking development appears to have made no headlines since.


An homage to the Shard​ 350 Park Avenue (Vornado Realty Trust)
No ground has been broken for this project, which would pay homage to London’s iconic Shard tower, but the prospect of a new, 1.7 million square foot tower in Midtown East got a major bump earlier this month when Ken Griffin’s Citadel committed to the master lease of the building.

The project calls for the demolition of the buildings at 350 Park Avenue and 40 East 52nd Street.
Under the terms of the deal, Citadel will master-lease Vornado’s 585,000-square-foot 350 Park Avenue for 10 years, with an initial annual rent of $36 million. Citadel will also master-lease Rudin’s adjacent 390,000-square-foot property at 40 East 52nd Street.
Vornado will form a joint venture with Rudin to buy 39 East 51st Street for $40 million and will combine that site with 350 Park Avenue and 40 East 52nd Street.
The deal gives Griffin the option to acquire a majority interest in the joint venture or exercise an option to buy the site outright for $1.4 billion and go it alone on development. 4 Hudson Square (SOM)
The Walt Disney Company applied in Aug. 2019 to construct a 19-story, nearly 1.3 million-square-foot building at 4 Hudson Square.
Construction has since plodded along at the building designed by Skidmore, Owings & Merrill and developed by Silverstein Properties, New York YIMBY reported in April. The 338-foot-tall structure, which is set to include 1.2 million square feet of office, production and retail space, is expected to be completed sometime this year. A rendering of Pier 97 (Credit: Hudson River Park Trust)
New York City might be expensive, crowded and dirty, but it increasingly has the green space to make up for it, thanks in part to a new waterfront park in Hell’s Kitchen.
Work started last November and is “well underway” to transform Pier 97 into a landscaped oasis filled with walking paths, a playground, art and an all-ages slide, among other amenities, the Hudson River Park Trust said. A representative for the trust said the park should be open to the public by this coming fall, slightly behind schedule due to supply chain issues. A rendering of 270 Park Avenue (ATCHAIN)
JPMorgan Chase is proceeding with another project that will transform the Midtown skyline, though there’s nothing new since April, when the bank unveiled plans for the building.
Plans call for a supertall 1,400-foot, 60-story skyscraper with net zero operational admissions, powered entirely by renewable energy. It will house up to 14,000 employees and will use AI, advanced water storage and triple-pane glazing to minimize energy usage.
https://eb2.3lift.com/pass?tl_click...7964861&ts=1673570609&bcud=424&ss=12&cb=30485
The project, which will yield 2.5 million square feet of office space, is expected to be completed in 2025. A rendering of the Crown Building conversion (OKO Group)
The ink has barely dried on the record sales at the Crown Building, but billionaire owner Vlad Doronin is already reportedly considering selling the property, where the top 20 floors are being converted into 22 luxury condos and an 83-room hotel. If he goes through with it, he could get $600 million for the property.
https://eb2.3lift.com/pass?tl_click...7964861&ts=1673570613&bcud=362&ss=12&cb=61600
Doronin’s OKO Group in June closed on $754 million in refinancing for the project, which in August reeled in the most expensive condo sale in Manhattan, when a unit went for $53.4 million.
Doronin and developer Michael Shvo bought the property in 2015 for $475 million. Shvo was sidelined from the project in 2017 after being indicted on tax evasion charges, but retained an equity stake.


Banking on the Bronx​ Renderings of Brookfield’s Bankside in the South Bronx (ArX Solutions)
Brookfield released renderings in Nov. 2019, showing its megaproject on the Mott Haven waterfront would include a seven-building spread and a 34,000-square-foot park.

The developer broke ground on the project, dubbed Bankside, in late 2019 and it has been steadily rising since. The development is slated to deliver more than 1,400 units, a third of which will be designated as affordable.