Got it, now I understand what you meant. It never occurred to me that “sold out” could actually mean “80% sold”. Despite all my years on these forums, I am clearly not yet fluent in RE-speak. Some Skyline Tower condo owners say they were deceived​

Life in Queens’ tallest condominium has not been what some of its unit owners expected.
Ninety buyers, representing fewer than 1 in 5 unit owners, filed a complaint this summer against Chris Jiashu Xu’s Skyline Tower in Long Island City with the attorney general’s office.

In a July 13 complaint obtained by The Real Deal, the owners cite issues with the 802-unit building’s marketing, management and construction, and raise questions about its sales and financial disclosures.

The 67-story luxury tower at 3 Court Square was the first to target a 10-figure sellout, with Xu projecting unit sales would add up to $1.1 billion. The complaint alleges that the sponsor’s sales and marketing agent, brokerage Modern Spaces, exaggerated the building’s success to a local website. Rapid sales can create urgency and inspire confidence among prospective buyers.

In an article published on Dec. 31, 2021, on QNS.com, Modern Spaces CEO Eric Benaim claimed Skyline had sold nearly 60 percent of its units, and was the city’s “best-selling luxury building” that year. But the complaint says the project’s year-end financial statement showed only 339 units had sold, or roughly 42 percent.
Benaim said his 60 percent figure included units under contract.

“We question how many units have actually been sold because this affects Unit Owners’ payment of actual operating expenses,” the complaint said. “If the Condo Board cannot keep track of its units sold in official documents, how can we expect it to administrate payment properly?”
Benaim referred questions about the building’s finances to Adam Kriegstein, a lawyer for the project sponsor.

“We, together with our client and the sales team, are extraordinarily proud of this project and maintain that the sponsor has at all times acted in good faith and in full compliance with the attorney general’s regulations,” Kriegstein responded in a statement.
The attorney noted that the concerned unit owners were granted full access to the condominium’s books and records and reviewed them. “Should the attorney general’s office wish to discuss the unsubstantiated claims in the letter, we welcome the opportunity,” Kriegstein added.

As of Aug. 18, roughly four years since sales began in the tower, 509 of its 802 units had sold.
The complaint also raised concerns about a flyer circulated by building staff regarding their right to organize for “the same wages, health care, job security, safety training, advancement opportunities and modest retirement afforded to over 35,000 building service workers across New York City.”

Skyline has suffered from construction issues, according to the complaint. There’s the delayed repair of the freight elevator, the delayed soundproofing of the mechanical room and punch lists that remain incomplete 120 days past closing.
The grievances listed in the complaint also populate the building’s Google Reviews, where users have submitted claims of structural defects, flooding and a lack of amenities.

Contract signings in Skyline slowed to a mere 35 in 2020 before bouncing back to 186 last year. As of August of this year, 116 have been signed.
Click to expand...

Also, I think there were two different firms marketing here (at least that was the case when I was looking there with a client recently). Which creates more murkiness about the ways either then markets the sales velocity....
Nikki Beauchamp NYRS ® MCNE
Senior Global Real Estate Advisor
Licensed Associate Real Estate Broker
Engel & Völkers New York City
+1.212.616.7600 x 2521
@nikkibeauchamp on IG/Twitter
nicolebeauchamp.com
nikkisellsnyc.com
Work with Nikki

David Goldsmith said:
I like the numbers MarketProof presents but find the conclusions are usually slanted to the rosy side. Especially considering the video I posted in the post directly above this one, I'm not nearly as sanguine about the health of the market.
Click to expand...

I like the MP platform as a way to see a bit more clearly than what one also gets when interacting with the on site teams as well sometimes....
Nikki Beauchamp NYRS ® MCNE
Senior Global Real Estate Advisor
Licensed Associate Real Estate Broker
Engel & Völkers New York City
+1.212.616.7600 x 2521
@nikkibeauchamp on IG/Twitter
nicolebeauchamp.com
nikkisellsnyc.com
Work with Nikki The 106,000-square-foot building will feature two setbacks and a limestone-colored façade, according to a rendering shared with The Real Deal. A source close to the project said that while pricing has not been determined, the firm is targeting the highest echelon of the market.
Spitzer Enterprises’ Charles Morisi is listed as the project owner on the filing, and SLCE’s Luigi Russo as the architect of record.

While the 50-year-old rental building at 985 Fifth Avenue is not landmarked, it lies within the Metropolitan Museum Historic District, meaning the city’s landmarks commission will need to approve its demolition. The planned project can be built as-of-right, allowing the developer to avoid a costly rezoning.
The firm would forsake substantial rental income to build its project. A 20th-floor unit in the existing building with views of Central Park asks $17,000 a month, according to a listing, and a 1,900-square-foot penthouse rented earlier this year for $30,000 a month.
The Spitzer family has a long history in New York real estate. In 2014, the Spitzers sold the Crown Building to Jeff Sutton’s Wharton Properties and General Growth Properties — now owned by Brookfield — for $1.75 billion, a record sum at the time and still one of the most expensive office sales in city history.
For decades, Bernard Spitzer built rentals and high-end condos, including the 57-story Corinthian in Murray Hill, which was the city’s largest apartment building upon its completion in 1988.
While new development sales have flagged from their pandemic highs, ultra-wealthy buyers, who are typically less affected by rising mortgage rates, have continued to snap up the city’s most expensive homes.
David Goldsmith
Associate Broker
Bank Neary Realty
David@BankNeary.com
212-731-4573
@nyc_real_estate_guy Instagram
www.linkedin.com/in/david-goldsmith-17148118

Staff member
Let's hope this week is an outlier because a 76% YOY drop in contracts signed is not a good look. I don't think we've seen this level since COVID froze the Manhattan market. 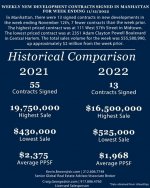 Staff member
A nice bump from last week's outlier low of 13, but still 40 short of YOY number (contracts signed down 68%). 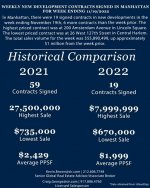 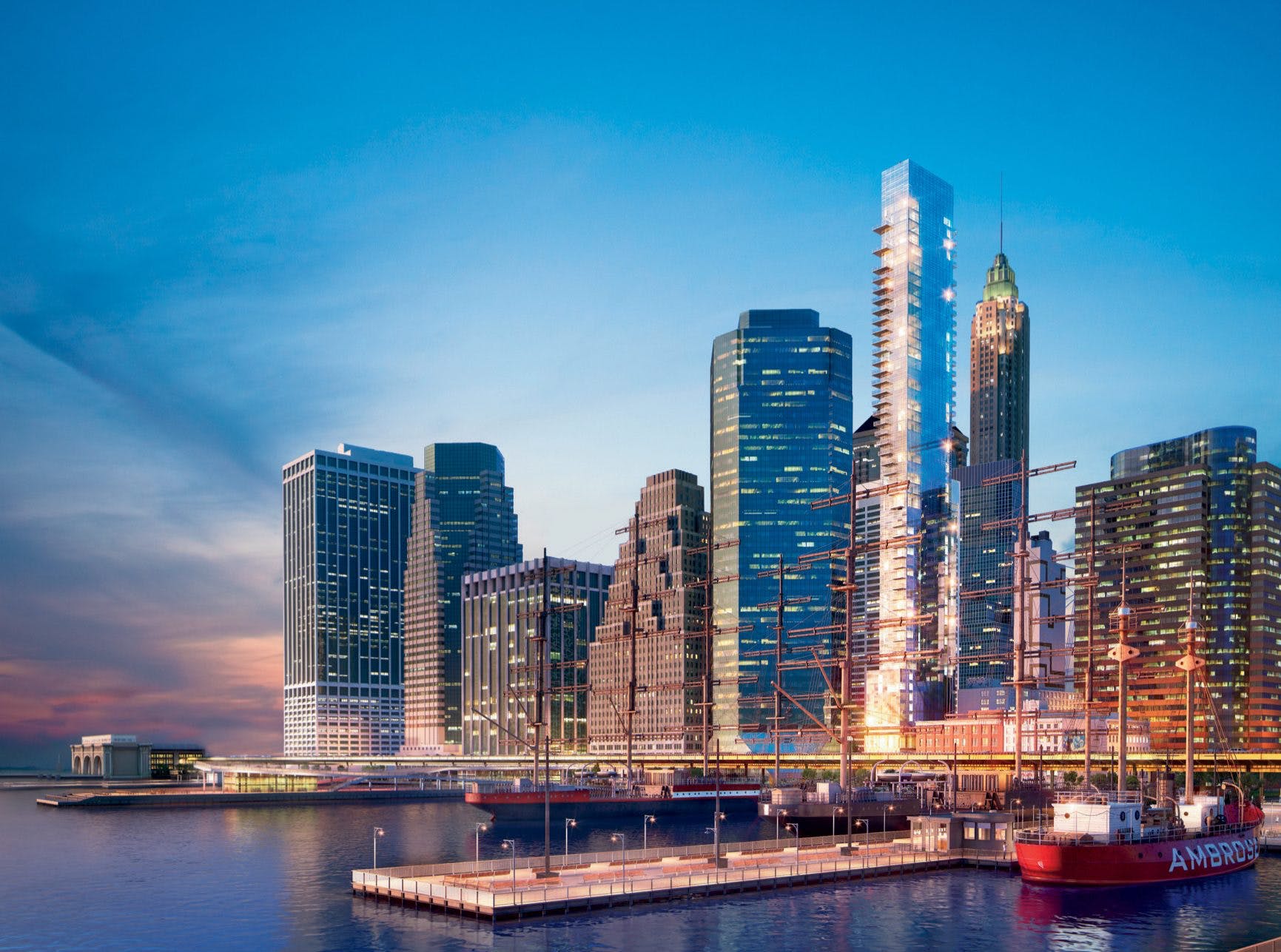 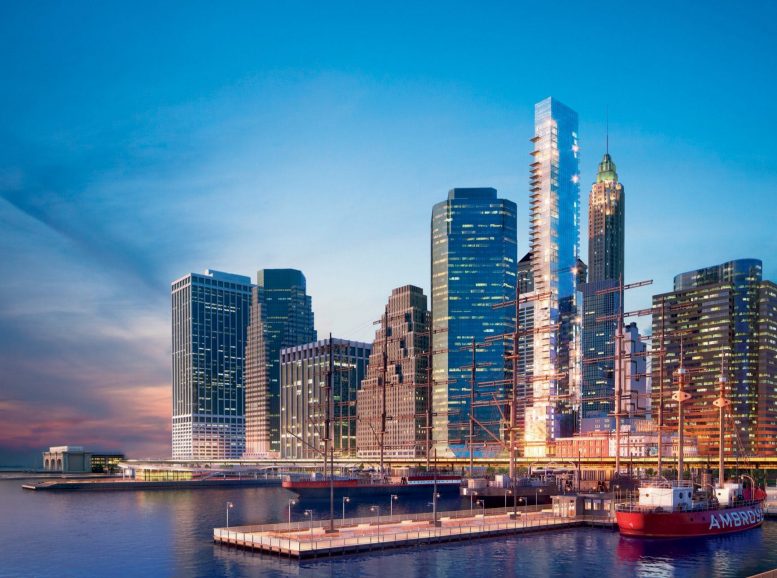 161 Maiden Lane. Designed by Hill West Architects
By: Michael Young and Matt Pruznick 8:00 am on November 21, 2022
Kicking off our annual Turkey Week rundown of notable stalled projects is Seaport Residences, a 60-story residential skyscraper at 161 Maiden Lane along the border of Lower Manhattan’s Financial District and the South Street Seaport District. Designed by Hill West Architects and developed by Fortis Property Group, the 670-foot-tall tower has been on hold since sometime in late 2020, and its future remains uncertain. The 200,000-square-foot structure is planned to yield 80 units with interiors by Groves & Co. Ray Builders was the latest contractor for the property, which is located on a narrow rectangular site bound by South Street and Maiden Lane. 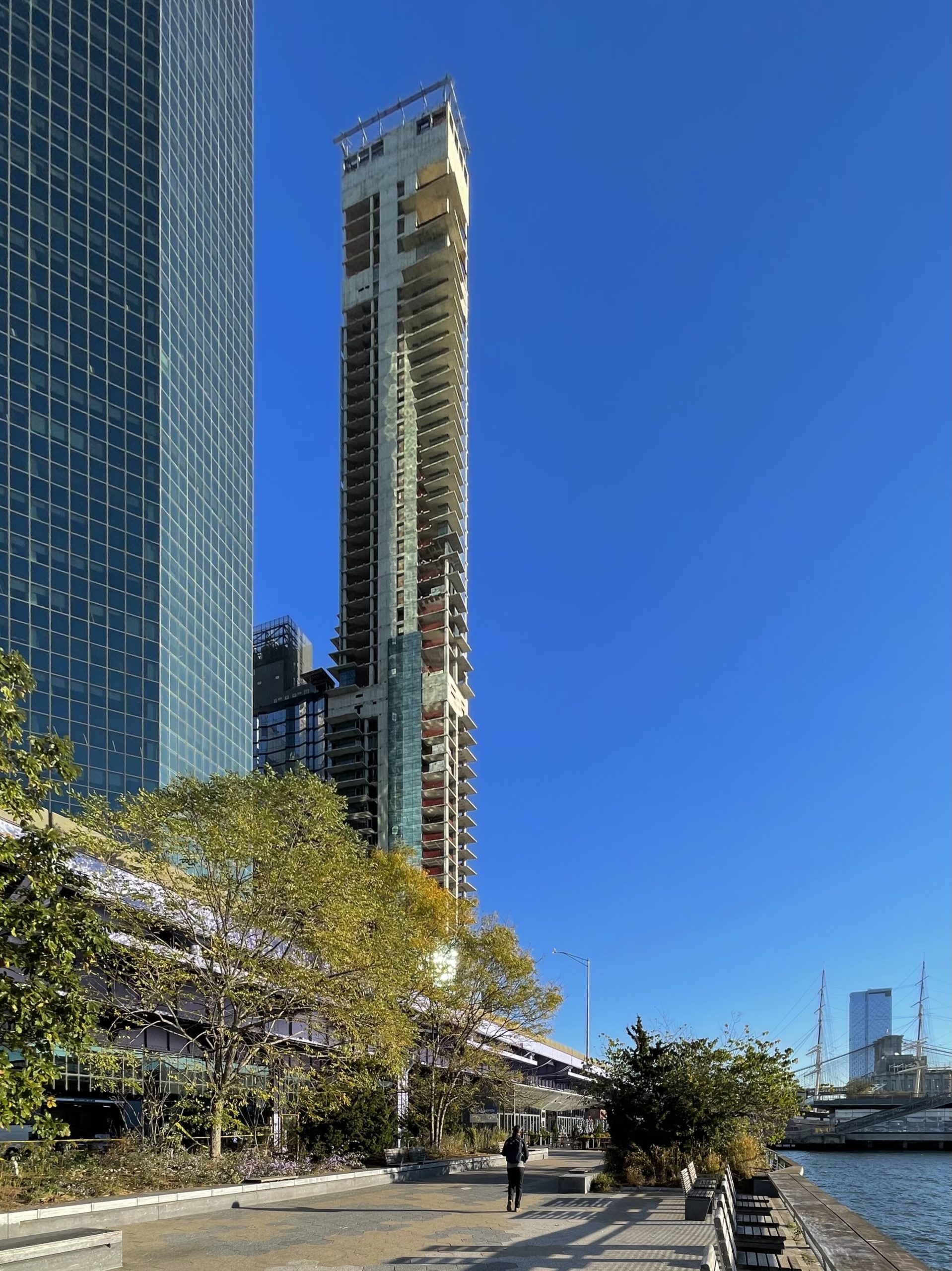 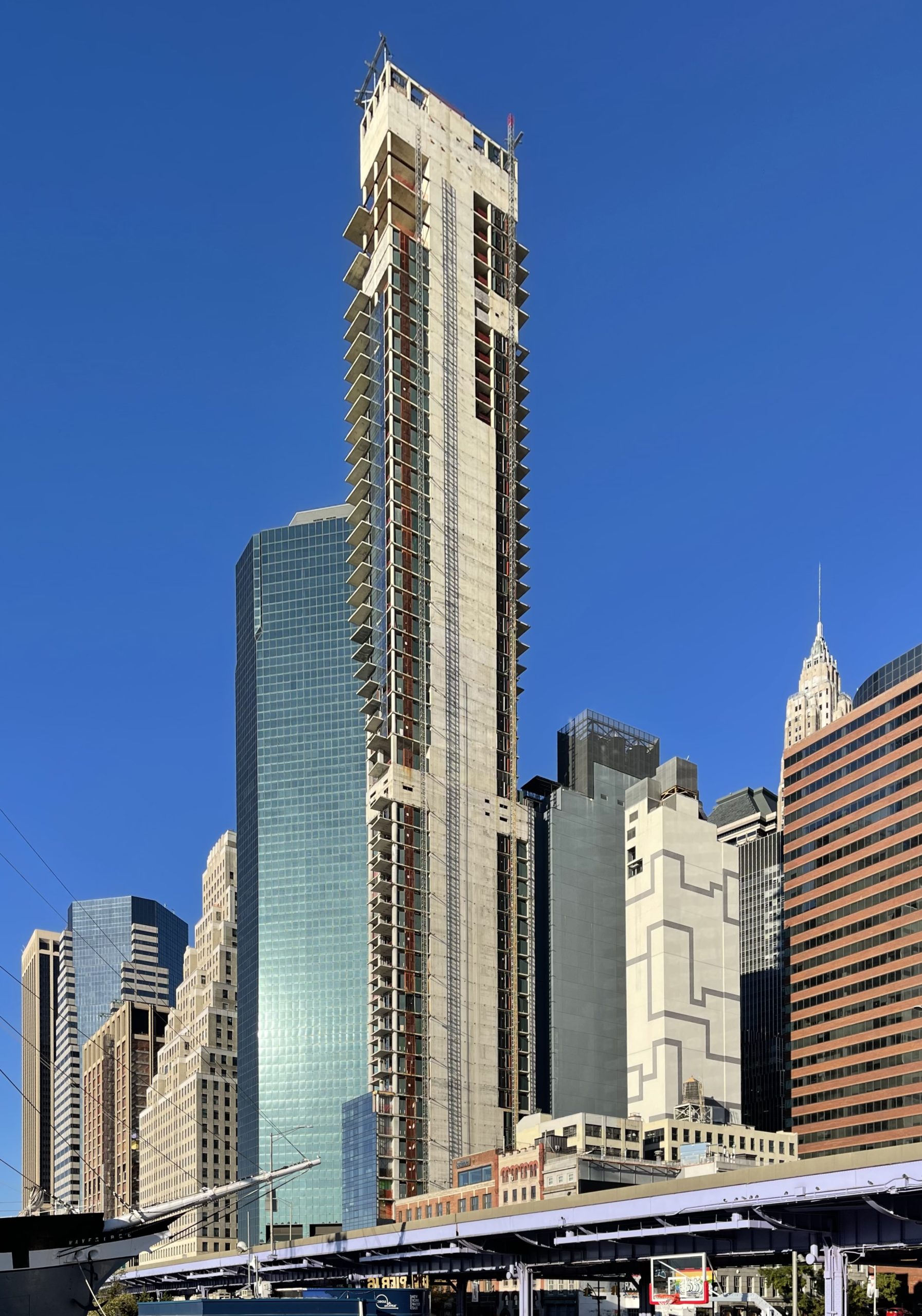 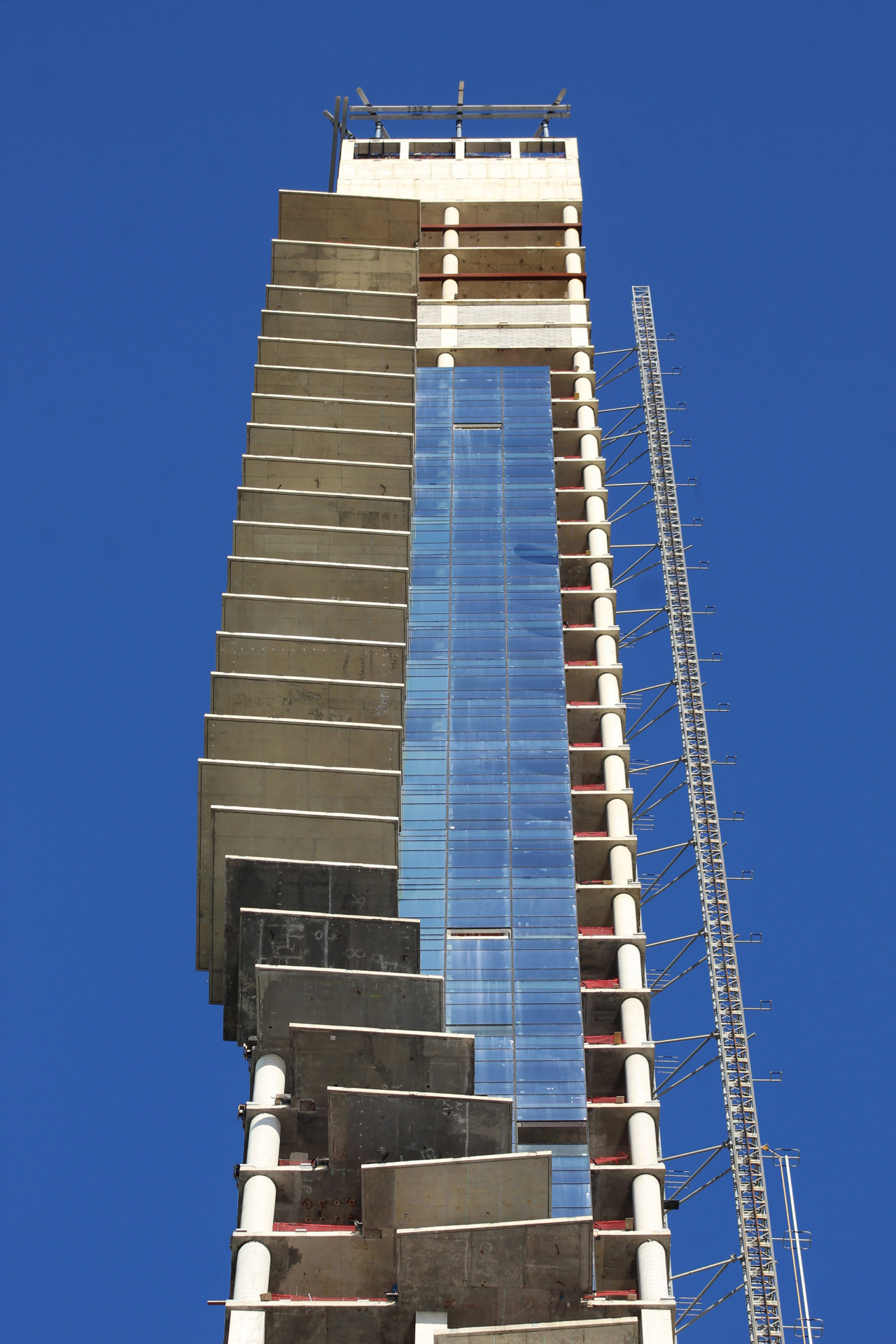 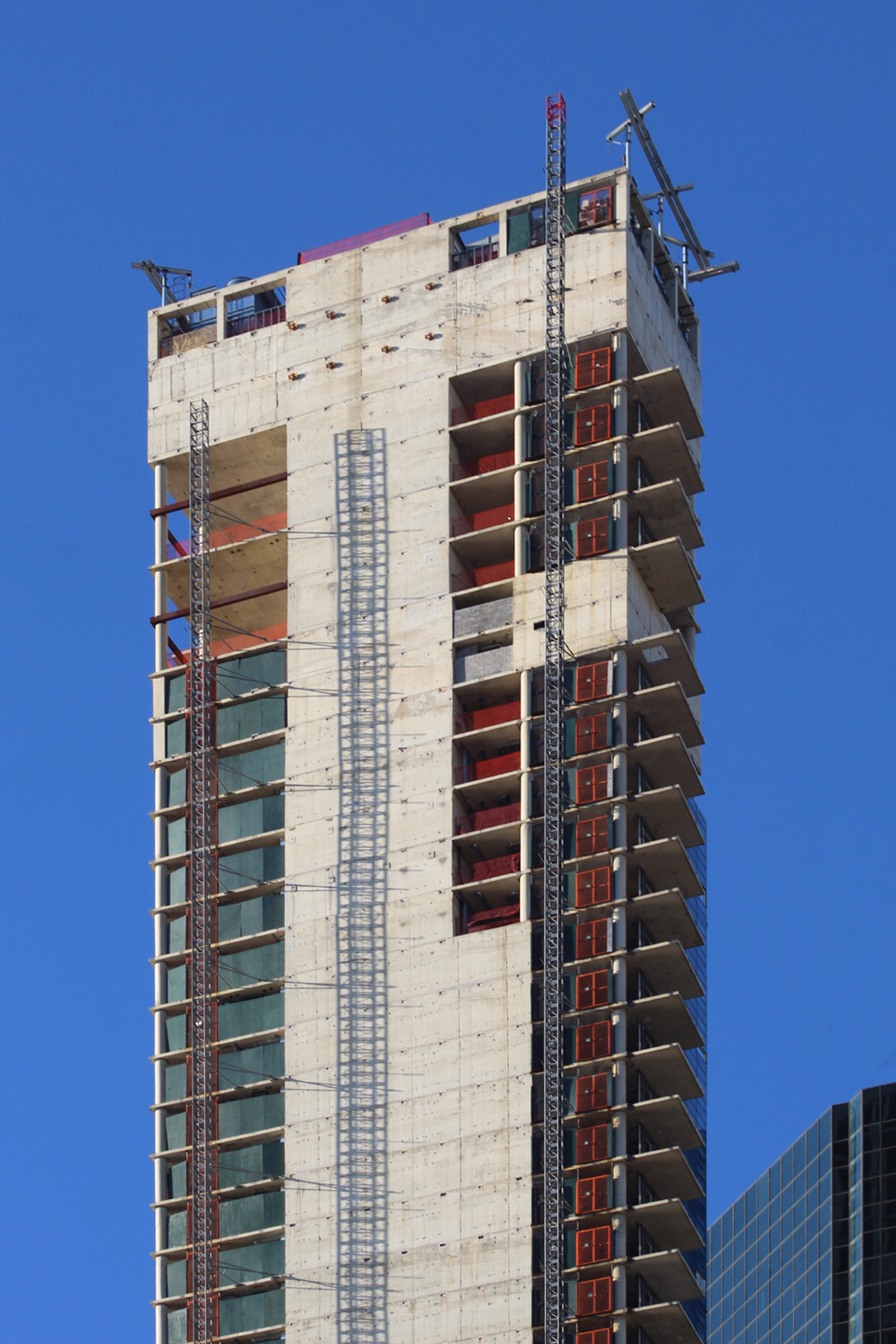 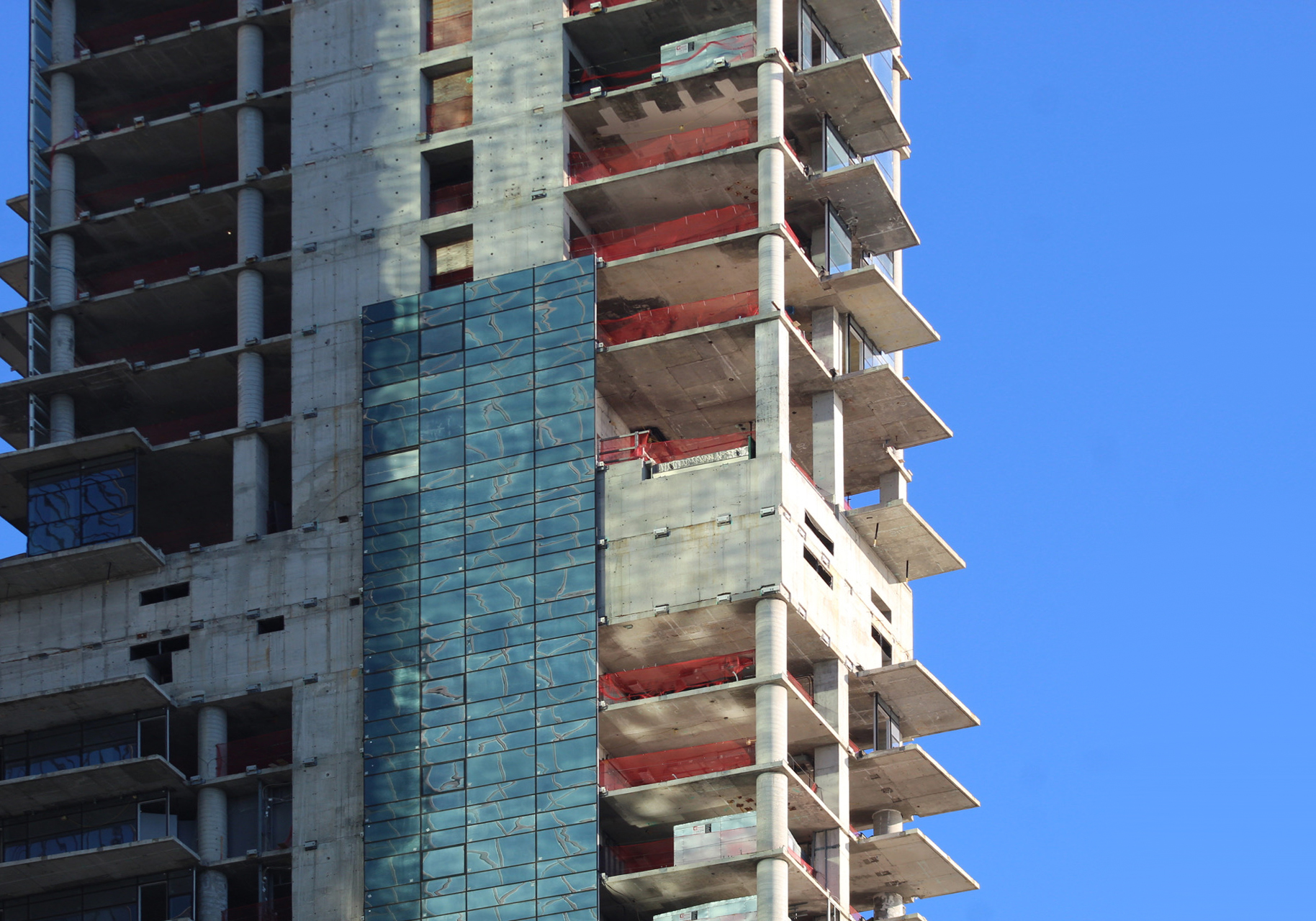 Seaport Residences. Photo by Michael Young
Seaport Residences made headlines in early 2019 when it was reported that the superstructure was allegedly leaning three inches to the north. Despite this, Fortis had deemed the tower to be structurally safe, and progress resumed on the curtain wall with a new contractor. However, our visit in September 2020 revealed that a portion of the glass panels had been removed. Today, the tower remains in largely the same condition. Click here for YIMBY’s coverage of the building’s structural findings from April 2019. 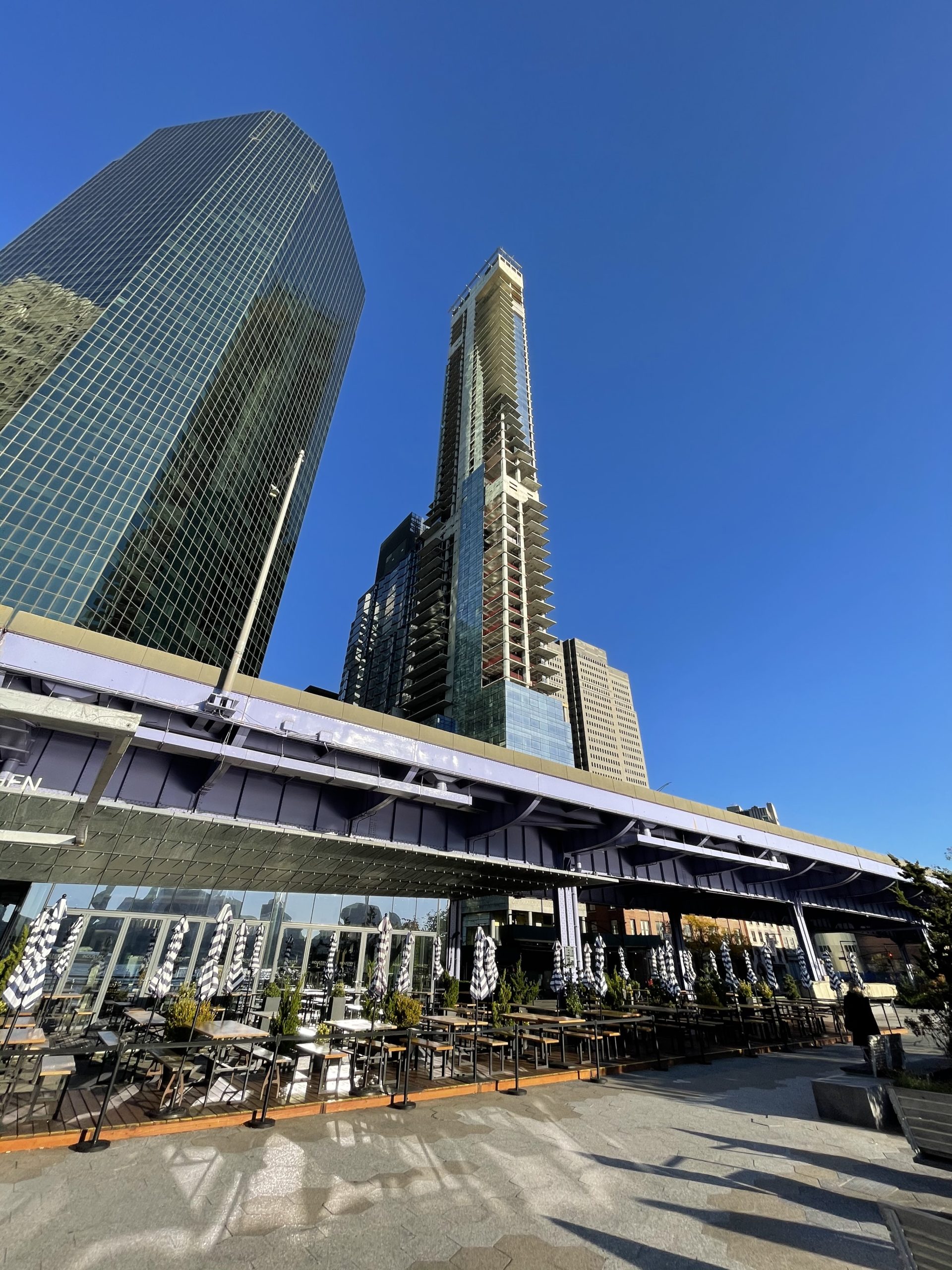 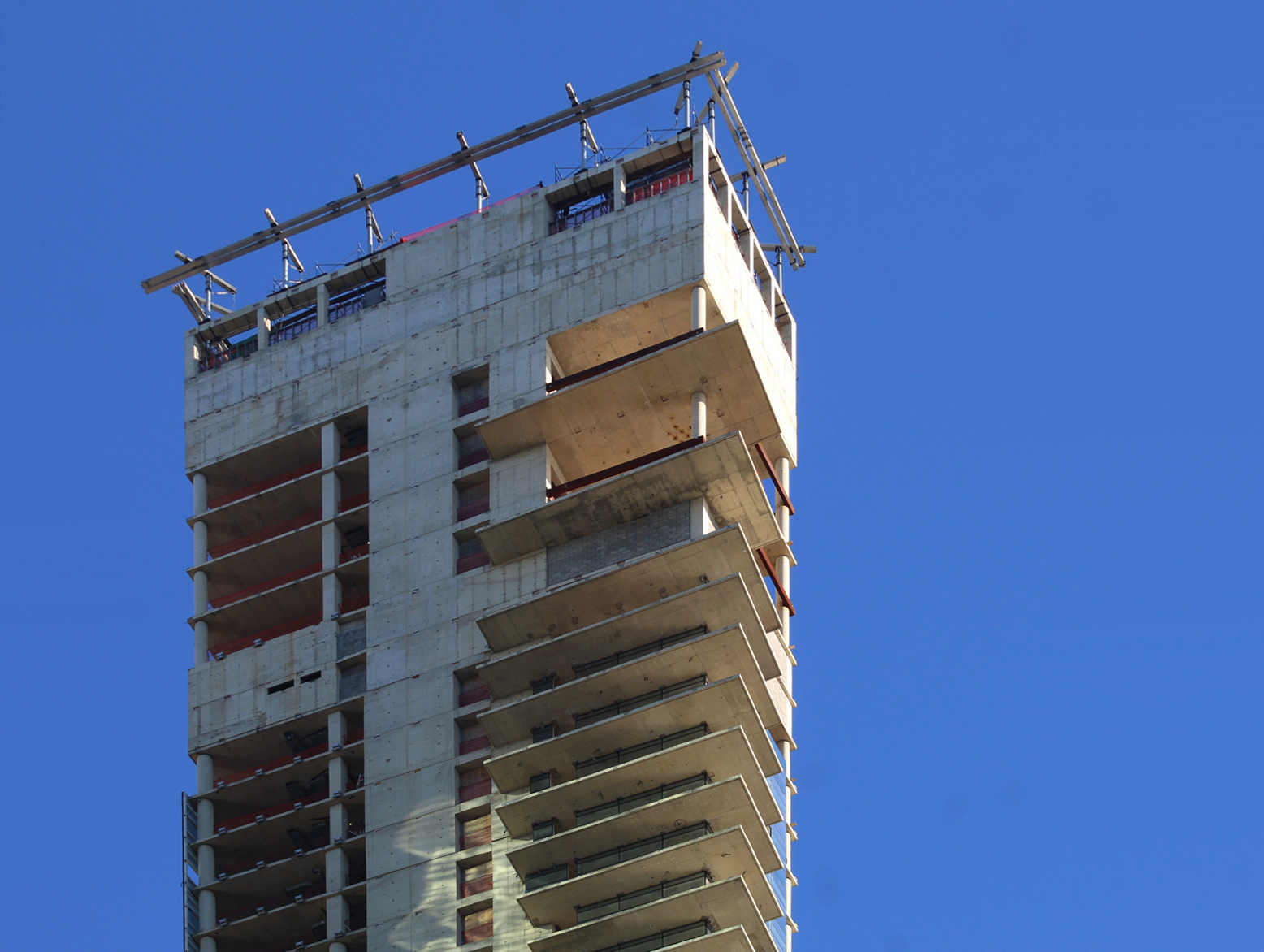 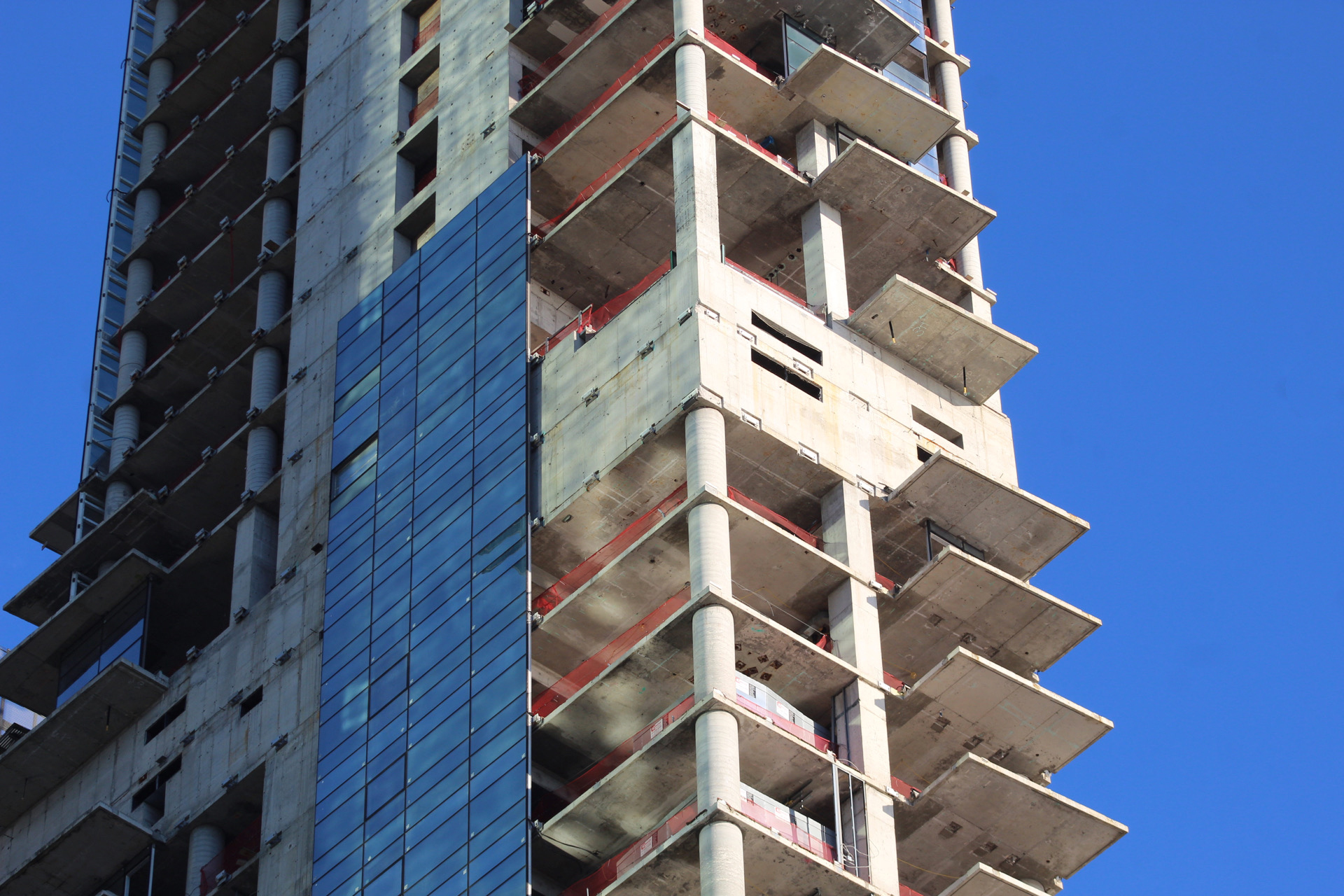 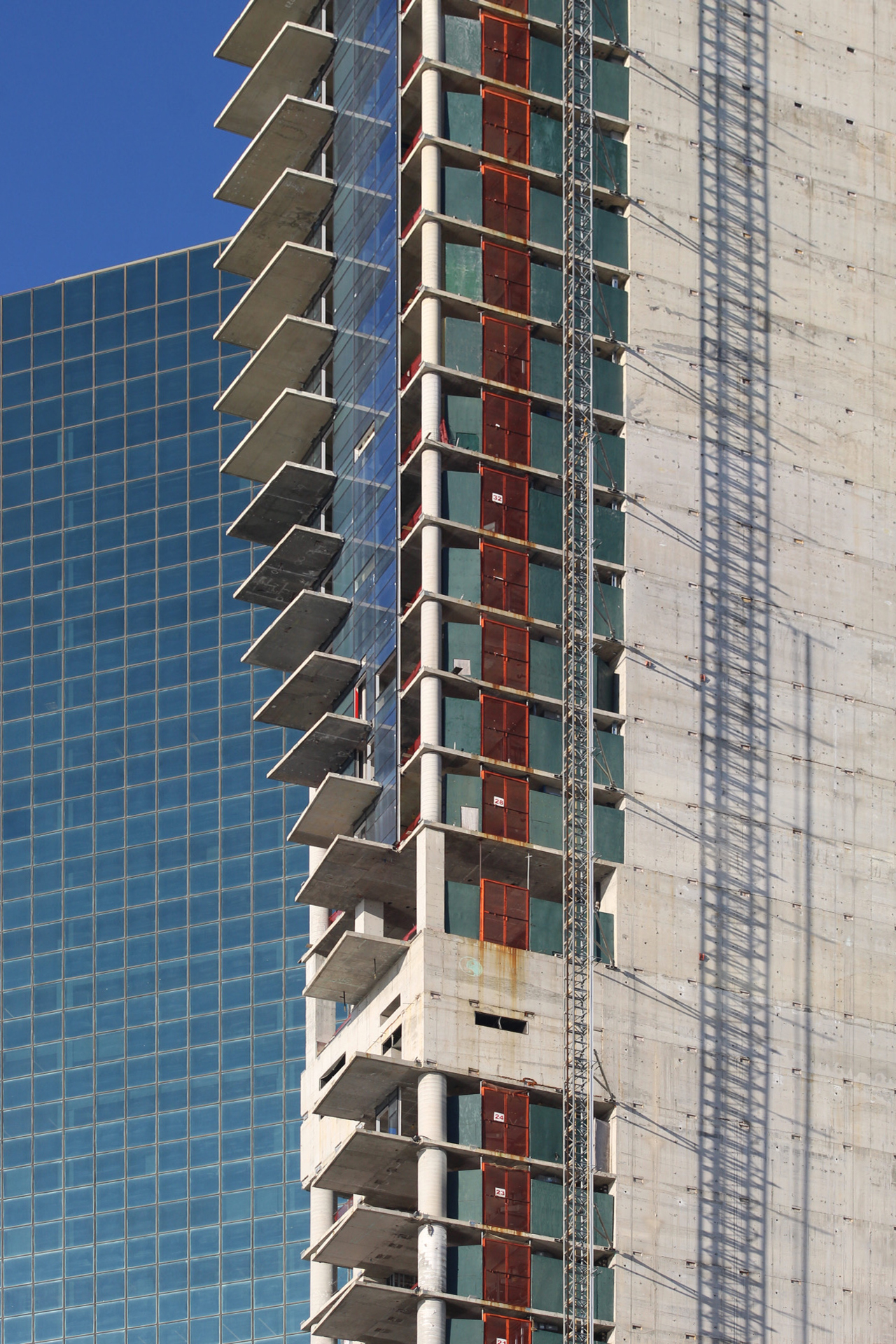 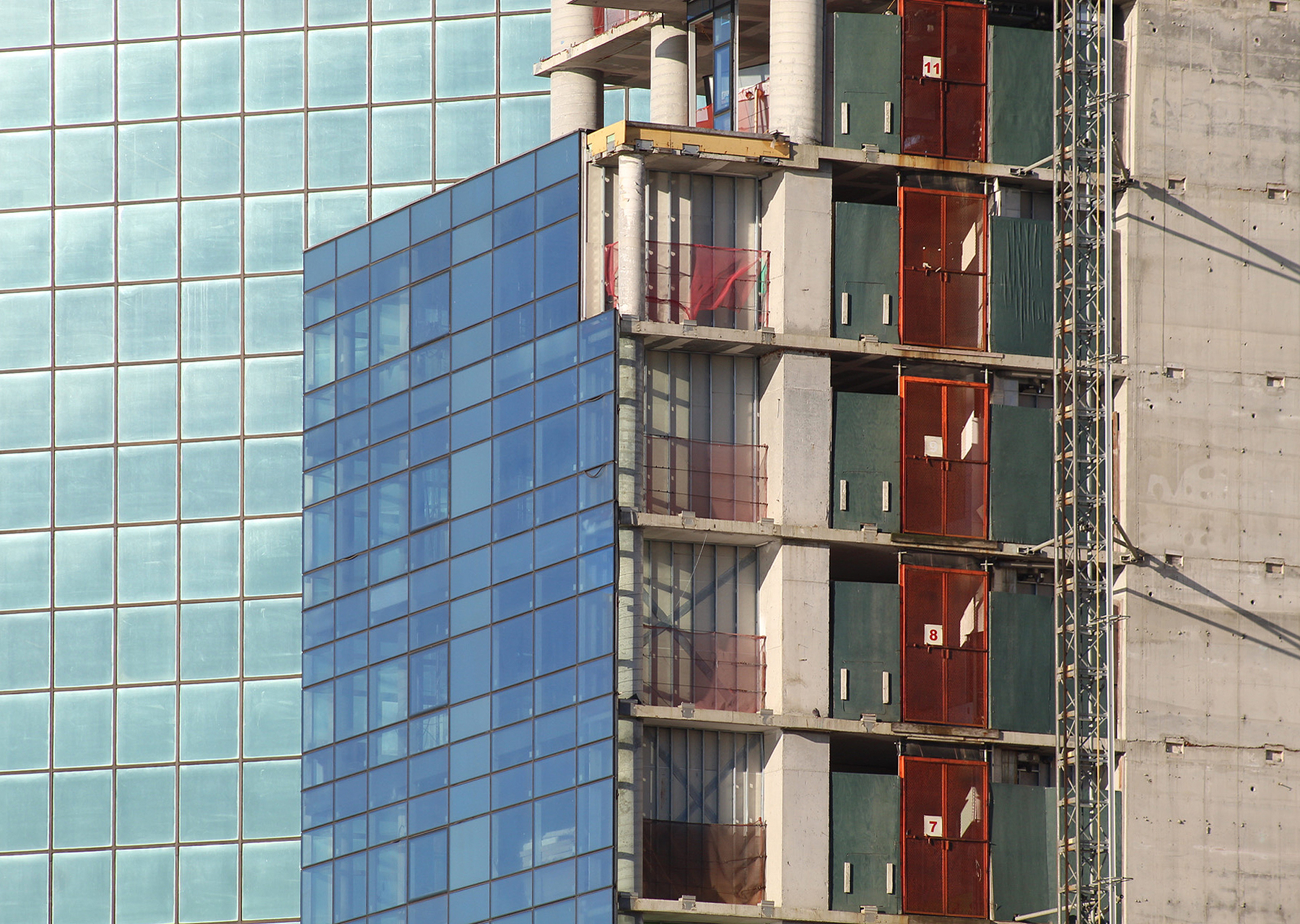 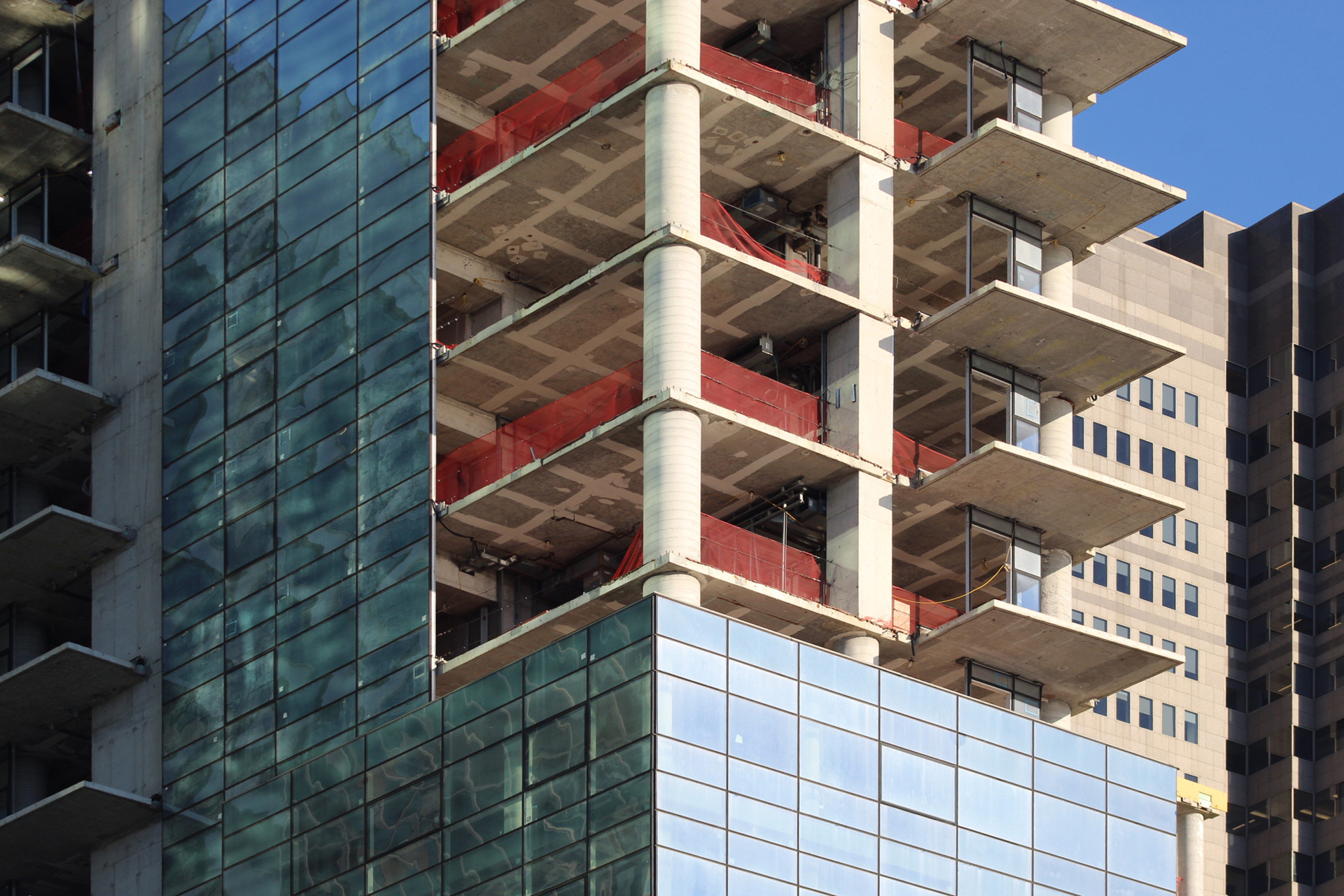 Seaport Residences. Photo by Michael Young
Below are additional photographs of Seaport Residences from the South Street Seaport District showing its height and contrast with the restored historic buildings along Fulton Street. 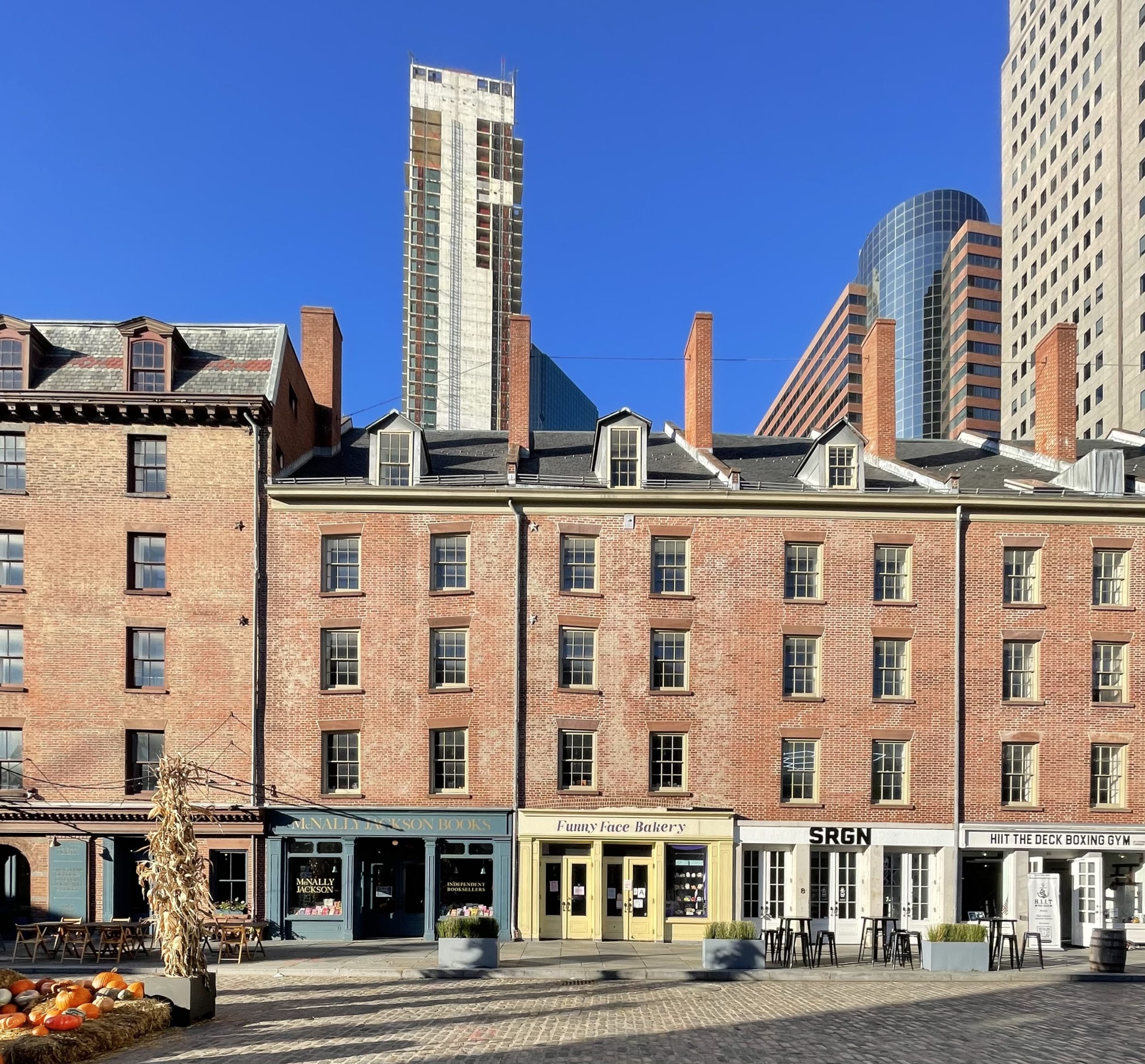 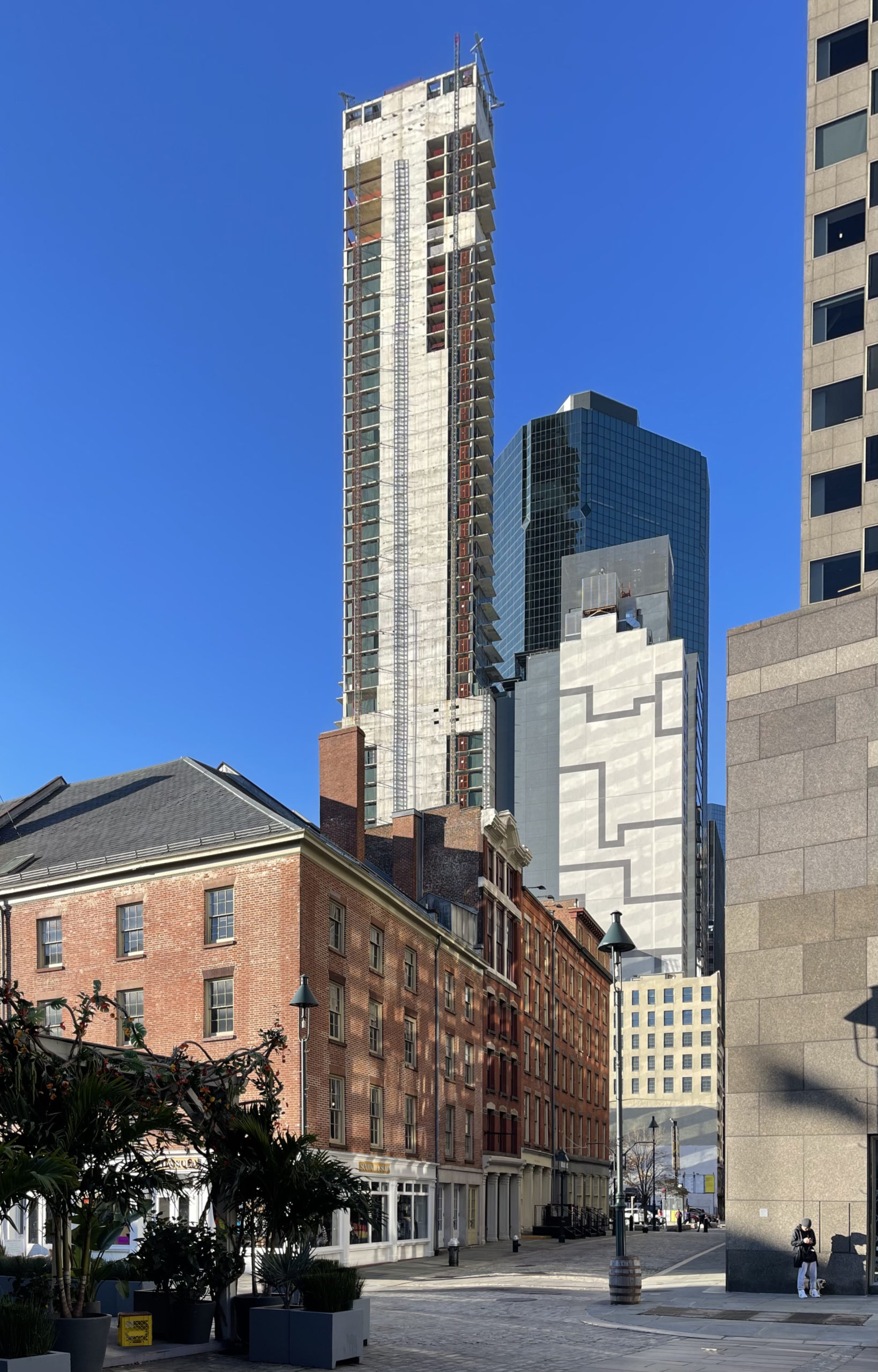 Seaport Residences. Photo by Michael Young
Should the project ultimately reach completion, residents will have convenient access to Jean-Georges Vongerichten’s recently opened seafood-themed market at the Tin Building next to Pier 17. 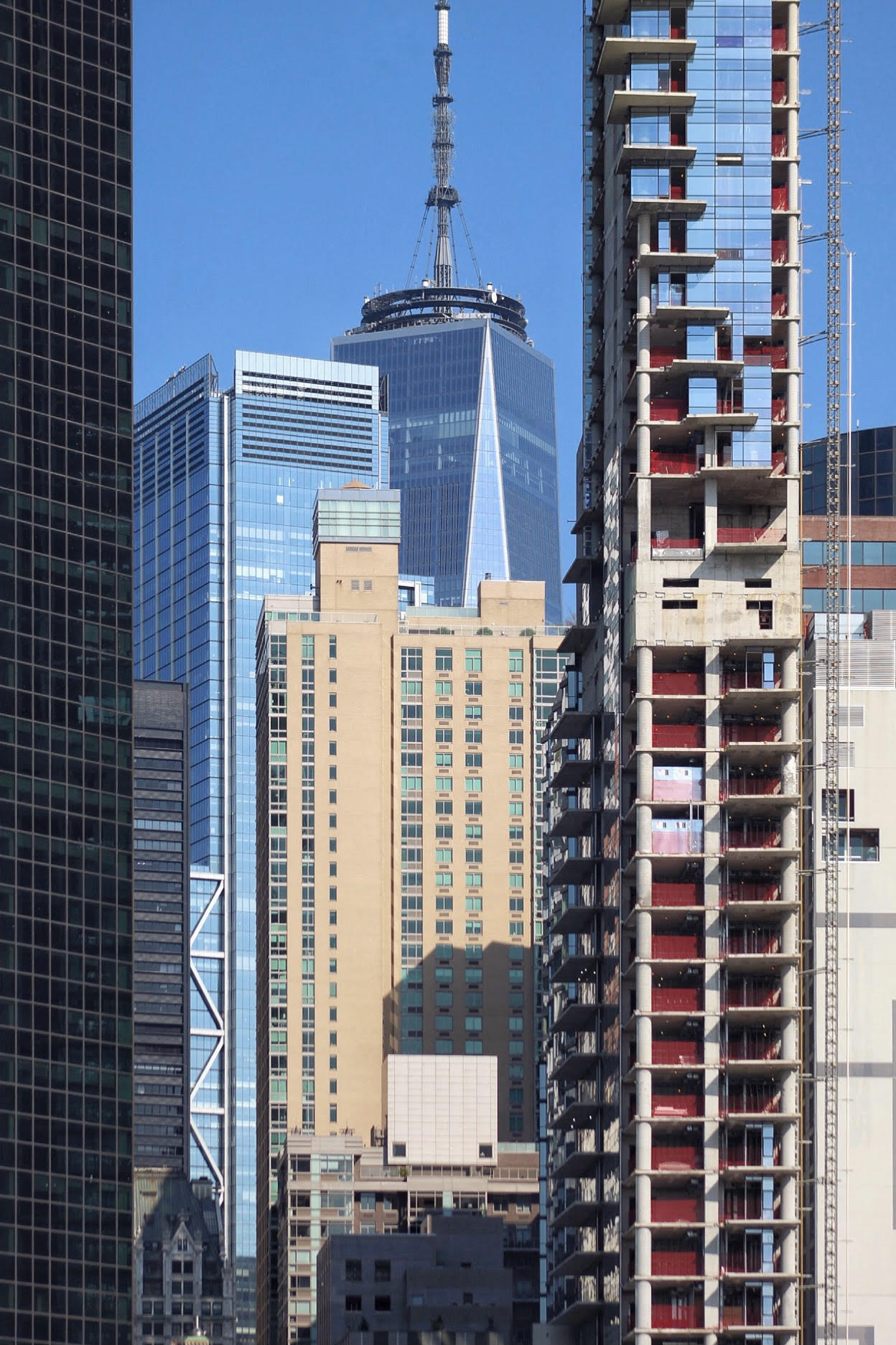