The Real Deal analyzed new building filings to rank the 20 most active developers in the city over the last 12 months by square footage.

New York City sprang back to life in the spring of 2021, and its busiest builders were no exception.
In the past year, the city’s 20 most active developers filed plans to build nearly 16 million square feet of projects across the five boroughs. Now, they face a whole new set of headwinds entering the second half of 2022.

Inflation, rising interest rates, an erratic stock market and fears of a recession have made it difficult to come by financing and tricky to pencil out new projects. What’s more, New York’s stringent land use process and high cost of labor make the city one of the hardest places to build in the country.
“With the environment in New York, there’s just too much risk. And you don’t get paid for that risk right now,” said Andrew Joblon, managing principal of Turnbridge Equities. “Why go through the brain damage politically and zoning-wise when you can’t make the math work?”
To gain a clearer understanding of which of the city’s developers will have the most at stake in the coming years, The Real Deal analyzed all new building filings submitted to the Department of Buildings between May 1, 2021, and June 1, 2022, for projects larger than 25,000 square feet.
Chetrit Group, the firm founded by Moroccan émigré Joseph Chetrit, topped the list as the city’s most active developer over the past year.
With 1.9 million square feet across three projects, Chetrit plans massive residential developments in Manhattan and Brooklyn. They include the development site at 265 South Street in Lower Manhattan’s Two Bridges neighborhood with plans for two residential towers, which Chetrit purchased in April from L+M Development Partners and CIM Group.
While that site has spent years in the headlines, another large Chetrit project, his 305,000-square-foot tower at 99 Fleet Place in Downtown Brooklyn, has progressed without a whisper. Elsewhere in the city, Chetrit filed plans in December for a 69-story, 300-unit skyscraper at 100 West 37th Street in the Garment District.
Peter Papamichael’s Vorea Group took second place, logging 1.3 million square feet across four developments. Vorea stuck to the outer boroughs, planning massive mixed-use projects in fast-developing, rezoned neighborhoods like Gowanus, where it has proposed more than 600 residential units across two co-developments with Domain Companies. In May, the firm signed indoor skydiving chain iFly to a 10,000-square-foot lease at its planned 50,000-square-foot mixed-use development on Borden Avenue in Long Island City.
Joblon’s Turnbridge Equities rounded out the top three with just over 1 million square feet across two projects, aided primarily by the 986,000-square-foot, multilevel last-mile distribution center it plans at 980 East 149th Street in the South Bronx.

Multifamily development is expected to plummet in the coming months because state lawmakers allowed the popular tax break 421a to expire without a replacement. Developers claim the loss of the incentive makes building apartments in the city untenable. Progressives and tenant advocates vehemently disagree. In any event, the last time the program lapsed, in 2016, new filings for apartment projects ground to a halt and did not pick up again until 421a was revived the following year.

“We tax rental housing like cigarettes in the city,” said David Lombino, managing director at Two Trees Management, which finished 16th on the list with two projects totaling over 562,000 square feet, including Bjarke Ingels-designed residential high-rises on the Williamsburg waterfront.
Lombino said the future of multifamily projects could be murky without some sort of lucrative tax incentive. While a handful of developers were able to complete enough foundation work by mid-June to qualify for 421a before it lapsed, those projects will still take years to come to market, obscuring the immediate effects of the tax break’s demise.
“I think right now there are a lot of people building, so you might not see the impacts of the loss of the incentive program for three to five years,” he said.
Some firms have shifted their focus to different types of properties while the state figures out its residential development incentives.
“Brand-new, Class A office space is going to continue to outperform, and the life sciences market is going to continue to gain steam,” said Chris Balestra, president of Taconic Partners, which placed 19th in the ranking. “We’re in the very early innings of it.”
Taconic plans a 536,000-square-foot residential project in Inwood, where it managed to qualify for 421a ahead of its expiration and secure financing before recent interest rate hikes.
Turnbridge, put off by the expense and red tape of residential development in the city, has placed its bets on last-mile distribution centers, for which demand exploded with the rise of e-commerce that accompanied the pandemic.
The firm’s focus on industrial isn’t new — it’s been planning these moves since the early 2010s, when a series of rezonings opened up formerly industrial parcels to residential development, effectively squeezing supply and making existing distribution centers more valuable, according to Joblon.
Those rezonings happened “before industrial was super sexy,” Joblon said, casting off fears of a slowdown in the sector, which have mounted in recent weeks as consumer confidence falls and Amazon, one of the nation’s largest warehouse tenants, is intending to sublet more than 10 million square feet of its space.
“I think the impacts to New York are de minimis,” Joblon said. “It makes up almost none of that 10 million square feet.”

Piling onto the uncertainty for developers are the dramatic cost fluctuations for materials such as lumber and steel that have driven up contractors’ rates.
In May 2021, the cost increase of building materials such as copper, steel, lumber and fuel hit levels not seen since the 1980s, while lumber prices had spiked 83 percent annually to $1,733 per thousand board feet.
More than a year later, developers are still struggling to manage the turbulent price changes.
“There was a lot of hard cost growth going on throughout Covid, but it sort of pales compared to what’s happened in the last six months,” said Spencer Orkus, a partner at L+M, seventh in the ranking with five projects totaling 787,000 square feet.
Larger developers have shifted their approach to procurement as contractors suggest buying materials upfront and stockpiling, even if that means paying a premium, so they can ensure availability and stabilize construction timelines.
While construction supplies are in low supply, so are the contractors that put them together. Orkus said the rush to break ground before 421a expired stretched contractors thin, making it hard to find partners with enough bandwidth to take on new jobs.
“There’s only so many contractors in this town, and as that demand shoots up, it makes it harder for us,” he said.

Against financial turmoil that has sent stock prices tumbling and interest rates rising, lending for new developments, particularly multifamily ones, has largely frozen.
As with residential projects that raced to get their foundations laid, it will take time for the effects to manifest in the market — projects that are already underway have secured their funding. But newcomers face a different reality.
“If you are starting a new financing process today, it’s more expensive and there are fewer lenders,” Taconic’s Balestra said. “If you don’t have top-quality sponsorship, it’s going to be difficult to find the financing you need.”
For one thing, lenders are unsure where the market will stand in a year. It’s hard to underwrite a new apartment building without a good idea of how much its developer will be able to earn by filling its units.
“We’re in this weird point right now where no one knows how to price deals and value deals,” Turnbridge’s Joblon said. “The A-note financing market is basically nonexistent right now.”
Lombino shared the same cautious approach.
“For every developer, there are things that you can control and there are things you can’t,” he said. “Two of the things that you can’t control are interest rates and demand to live and work in the city.”
“Long-term, we want to ensure that the city is healthy and is generating demand to live and work here.”
David Goldsmith
Associate Broker
Bank Neary Realty
David@BankNeary.com
212-633-2727 x213
@nyc_real_estate_guy Instagram 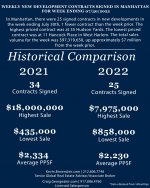 Staff member
Developers reported 188 deals across the city, 37 percent fewer than in July 2019 New development contract activity fell nearly 30 percent in July, the market’s first dip below pre-pandemic levels since the start of the year.

Condo sales hit their lowest mark of the year, dipping below pre-pandemic levels​

Sales of new condominiums in July evoked the Tom Petty classic “Free Falling” — and it’s developers who are home with broken hearts.
New development contract activity plummeted 30 percent last month, dipping below pre-pandemic levels for the first time all year. Developers reported 188 deals across the city, 37 percent fewer than in July 2019, according to a report by Marketproof.

“There was one day in July where the contract numbers were so low that I was like, ‘Guys, let’s double check those,’” said Marketproof CEO Kael Goodman.
The market is split between haves and have-a-lots, as wealthier, less rate-sensitive buyers continued scooping up the most expensive condos, while most others stepped back. Nearly 20 percent of contracts last month were for homes asking more than $4 million, raising the median sale to $1.7 million, a six percent increase from July.

Though mortgage rates have slid back toward 5 percent, a volatile stock market, fears of a recession, ongoing inflation and supply chain woes are all weighing heavily on condo sales.
Manhattan developers reported 99 contracts worth $327.6 million, down about 40 percent from June. Ultra-luxe developments performed better than the rest of the pack, though, bringing the borough’s median price per square foot to $2,154, up 11 percent from the same period in 2019.
JDS Development’s 111 West 57th Street notched what was likely the month’s priciest sale. A penthouse at the Billionaires’ Row skyscraper went into contract asking $21 million. It was also a hot July for OKO Group’s Aman New York, which snagged the second and third-most expensive contracts. Extell’s One Manhattan Square led the borough in overall activity with six contracts.

Meanwhile, Brooklyn recorded its worst month since June 2020, when the city was in the midst of an exodus. Developers there posted just 66 contracts, down 50 percent from pre-pandemic levels. Total dollar volume fell to $97.6 million.

As usual, Queens sales were anchored by just a handful of high-profile developments, like Risland US’ Skyline Tower. While sales volume in the borough is up 50 percent from pre-pandemic levels, it fell nearly 40 percent month over month.
David Goldsmith
Associate Broker
Bank Neary Realty
David@BankNeary.com
212-633-2727 x213
@nyc_real_estate_guy Instagram 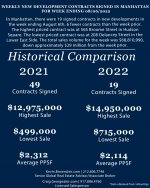