A penthouse taking up the 45th floor of 200 Amsterdam Avenue has set a record for Lincoln Square, fetching $4,909 per square foot.

Saved by the court, 200 Amsterdam locks in record price​

After surviving a judge’s order that they be knocked down, the top floors of 200 Amsterdam Avenue are riding high.
A penthouse taking up the full 45th floor has set a record for the Lincoln Square neighborhood, selling for $4,909 per square foot — $19.5 million for 3,937 square feet.

The three-bedroom unit at the SJP Properties condominium offers views of Central Park, the Manhattan skyline and the Hudson River from various vantage points, including the dining room, kitchen and primary bedroom. It has three and a half bathrooms and a 631-square-foot terrace that runs the entire length of the floor.
“What sets these apartments apart from the marketplace is you get the best views of any building in New York City,” said Robin Schneiderman, managing director of Brown Harris Stevens Development Marketing, which represented the sponsor. The unnamed buyer was represented by Nick Gross of Compass.

As of January, the building had recorded $332 million in sales. Over half of the units have sold and closed.

Amenities in the building are spread over three floors of indoor and outdoor space. The spa features a 75-foot saltwater pool, rejuvenation rooms with steam and sauna, a meditation room and treatment room. There is also a fitness center, a golf simulator and a children’s playroom.
The building’s club offers a landscaped terrace, lounge and dining room, billiards table, butler’s bar, library with grand piano, two equipped virtual teleconference rooms and soundproof rehearsal room.

In March 2021, A New York State appellate court reversed a lower court’s ruling that called for developer SJP Properties to remove about 20 floors from the 52-story tower, which was nearly complete. The de Blasio administration sided with the developer to protect the permit-issuing authority of the city’s Department of Buildings.
“Nobody’s ever going to be able to build a building this high again,” said Schneiderman.
David Goldsmith
Associate Broker
Bank Neary Realty
David@BankNeary.com
212-633-2727 x213
@nyc_real_estate_guy Instagram 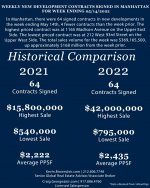