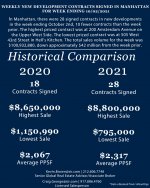 Staff member
September is often the slowest month of the year so some could be attributed to that. Let's see whether or not there is a rebound typical of October. New development condo sales slow in September but buyer activity is still elevated compared to the same months in 2020 and 2019.

The spring and summer frenzy at new developments may have disappeared with scorching temperatures, but buyers are still on the prowl.
The pace of new development contracts slowed down in September by 2021’s record standards, but volume remained elevated compared to the previous two years, according to a monthly analysis of new development sales contracts by Marketproof, a real estate analytics company .

There were 337 contracts signed for new development condos in the city last month, down 22 percent from August’s total of 421. Despite the slowdown, September’s activity is still up 30 percent compared to the same time last year and up 29 percent from September 2019.

“We had three months in the summer that were truly remarkable,” said Kael Goodman, CEO of Marketproof. “These are still very elevated numbers [we’re] just not at the peak anymore.”
Goodman said new development sales are not influenced as strongly by seasonal trends and “there’s no reason to think that anything is really going to change.” He said he expects strong sales compared to past years to continue.

As is typical, most of last month’s contracts were signed in Manhattan and Brooklyn. Manhattan had 174 deals, followed by Brooklyn’s 120. Queens had 43 contracts.
The best-selling projects were 160 Imlay in Red Hook with 11 signed contracts last month, Long Island City’s Skyline Tower with 10 contracts and 300 West in Harlem, where 8 deals were inked.
David Goldsmith
Associate Broker
Bank Neary Realty
David@BankNeary.com
212-633-2727 x213
@nyc_real_estate_guy Instagram 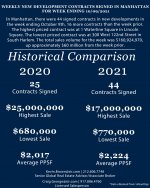 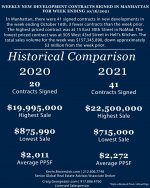 Lender gets aggressive as developer struggles to control Hayworth building​

Ceruzzi Properties has tried just about everything to save its troubled Hayworth condo project on the Upper East Side, but the developer has run out of rope.
The lender on the 61-unit building on Lexington Avenue initiated a foreclosure action for Ceruzzi’s ownership interest in the property, according to a notice for the auction.
The move by the UK-based Children’s Investment Fund comes after Ceruzzi — whose founder, Louis Ceruzzi, died unexpectedly in 2017 — tried a number of tactics to make the best of the situation and control the fate of the project.

The developer, led by president Arthur Hooper, tried and failed earlier last year to secure rescue financing for the Hayworth and later sought to sell its equity position. But Ceruzzi’s price was too high, according to a source familiar with the project, and potential investors balked.
The Children’s Fund sued Ceruzzi last fall for missed payments on the construction loan, and as recently as last month Ceruzzi agreed to a $29 million judgment. It’s not clear what has since led to Children’s initiating the foreclosure.

Representatives for Ceruzzi and Children’s Investment Fund did not immediately respond to requests for comment.
An auction for Ceruzzi’s stake in the completed building is scheduled for Jan. 10, according to materials from a Cushman & Wakefield team led by Adam Spies and Adam Doneger, which is marketing the sale.
Ceruzzi began assembling the site for the Hayworth, 1289 Lexington Avenue, in 2013, and launched sales in 2019. But by then the city’s condo market had weakened significantly and the project struggled.

The Children’s Investment Fund, which backed some of the biggest condo projects of the last development cycle, has become more aggressive with delinquent borrowers. The company is foreclosing on HFZ Capital Group’s interest in its $2 billion XI project on the High Line.
David Goldsmith
Associate Broker
Bank Neary Realty
David@BankNeary.com
212-633-2727 x213
@nyc_real_estate_guy Instagram 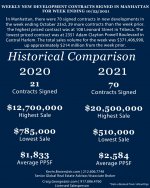